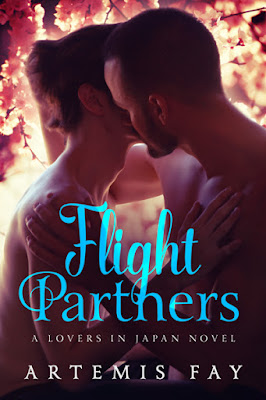 About Flight Partners
Can a romance that began a mile high make a smooth landing?

When a charming stranger soothes Andy MacKinnon’s fear of flight, it doesn’t take much before the two are snuggling at 40,000 feet.

Too bad that sexy guy turns out to be Andy’s new coworker, Kenneth Ohno.

As two expats in Japan teaching at the same school, not only will they work together, they’ll share a small apartment. It’s get along or quit.

After the explosive chemistry of their first meeting, Andy wastes no time in laying down the rules. A relationship is off the table. They aren’t even going to be friends—coworkers is enough to manage for two twenty-somethings who can’t seem to keep their hands off each other.

But it isn’t long before their living arrangements hit turbulence. Kenneth isn’t the first roommate Andy’s fallen for, and the last relationship ended in a nosedive. Can Andy and Kenneth make a smooth landing?

Or will work and play get mixed up one time too many? 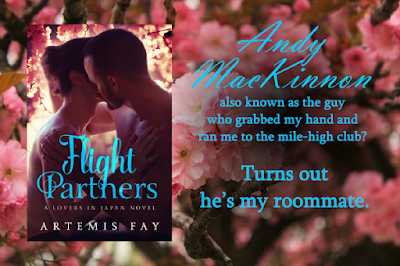 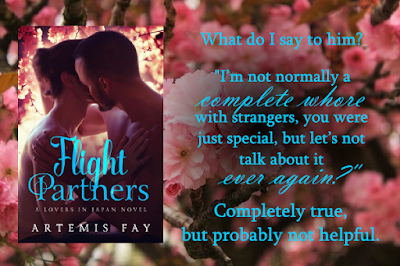 An Excerpt from Flight Partners
Andy

We’ve reached the head of the runway with two jets ahead of us. Five minutes until departure. Five more minutes of sitting here. I always do wear my running shoes to fly.

There’s a tap on the back of my hand. “Nervous flier?”

What gave it away, the white knuckles or the fact that I can hear my own teeth grinding?

My seat partner taps my hand again. “Hey. So. Uh. You’ve got a charm on your bag. Is it a good-luck charm?”

He’s trying to distract me, how sweet. “No, it’s a safe-flight charm. Kiyomizu-dera Temple in Kyoto. A friend bought it for me.”

“That was nice of them.”

“Very. Look, it takes a lot of concentration to not throw up at this part. I’ll chat when we hit the sky, but for now, I need to stop opening my mouth.”

Next to me, Seat Buddy shifts, no doubt away, or to get out the puke bag in preparation. Not that I’ve ever actually thrown up, but you never know, I could just make my day. Good job, Andy.

And then warmth covers my clammy knuckles. Fingers squeeze my hand, firm and strong. “No worries, I’ll just talk, then. I used to travel with my grandparents a lot, and my grandma gets really nervous when she flies, so my grandpa always told her stories. Probably kind of weird for a stranger to do that, but I figure if I annoy you, you can just throw up on me in self-defense.” His thumb is making circles around the side of my hand, slow and steady, the heat of it travelling up my arm. What the hell. Seriously, what the hell. I’m not going to throw up now, I’m going to die of shock. “How many planes to go?”

“And you’re fine once we hit the air, got it.” The low tones of his voice vibrate down my spine, anchoring me tight to my seat. “See, my grandma wasn’t, so she’d take a sleeping pill and go out like a light. Problem was, when we were only going from Chicago to Orlando, she’d be groggy once we got there. One time, my grandpa told the flight staff she had sleeping fits, and we just borrowed a wheelchair and bundled her into the taxi from that. We put Minnie Mouse ears on her before she woke up. She walked around wearing them for half an hour before she realized.”

Okay, now I’m just picturing the Japanese baa-chan across from us wearing those ears, yelling at her husband about them. To-chan, dame yo! Add that to the fact that this guy is holding my hand and I’m in overload. Why…I can’t even…

The plane jolts forward, turning into position. Oh God, here we go. Brace. Two minutes and this will be over. Or we’ll be in flames.

Seat Buddy’s other hand lands on my forearm, kneading the muscles there. I can’t tear my eyes away from the window, but his voice sounds close as he murmurs, “Funny, charging the runway makes you sick, but it always gives me a hard-on.”

His gray eyes are six inches from mine, witch-pale, surrounded by eyelashes a touch on the long side. Is he half-Japanese?

The engines have reached a roar. Sudden acceleration slams me back into my seat as we race down the runway, faster, faster. The terminal is flashing by, trollies, other planes, but we’re not going fast enough. Oh God, we’re not going to make it, we’re going to go off the runway into the grass and hit the fence and die.

The wheels lift off, and my stomach swoops. We’re flying. 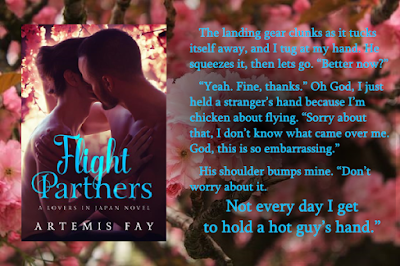 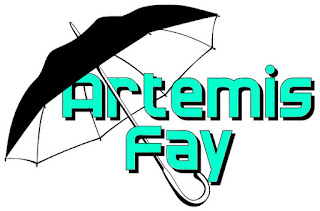 While in university, I studied abroad in Japan for a year. That of course wasn't enough, so having graduated with a degree in Global Studies, I returned to live and work there for nearly three more years.

First I was at an eikaiwa much like the one in Flight Partners. Later I worked at a daycare in another city.

So many of the background details of Flight Partners was taken either from my own experiences, or those I heard from friends. Even things that seem unlikely, like the state of oversight of visas (very lax!), are true to Japan. It's a country of contradictions, but so beautiful it keeps drawing people back.

These days, I live in the US with my husband, writing by day, teaching ESL by night. What can I say, it's a living. 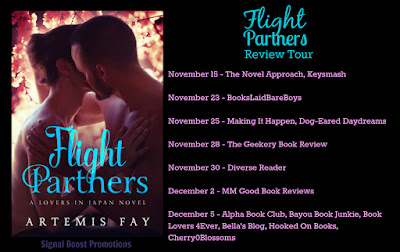