Review: Not Another One Hit Wonder by J.M. Snyder 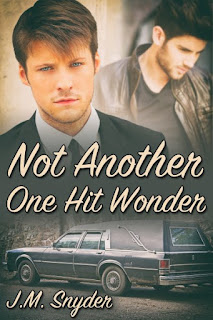 Not Another One Hit Wonder is the new standalone book from J.M. Snyder and it's a second chance love story about two best friends turned boyfriends who went their separate ways after high schools only to meet again when they're thrown together by the death of a loved one more than two decades later. Jamie Eckert and Derek Duran were best friends and then they fell in love as teenagers. When Derek leaves their hometown of Ashbury, Virginia to pursue his dream of becoming a rock star, Jamie's heartbroken, but it's Derek's not staying in touch that hurts even more. Now both forty-two, Jamie and Derek find each other in each other's company. Derek's mother has just passed, and with Jamie now taking charge of the family-owned mortuary business, he has no choice but to talk to his ex. With a six-year-old daughter to take care of, the last thing Jamie needs is to get his heart broken once again, but Derek clearly wants to rekindle their romance. Will these two get over their issues to find love yet again?

I wasn't really that huge of a fan of Derek's. For the guy to give his ex a kiss after all those years of not reaching out and then to be that forward? Argh! It made me want to smack him AND Jamie. Why Jamie? He could have made Derek work for it, especially after how things ended between them. It also seemed as if Derek was okay with Riley--Jamie's daughter--but not really as if he wanted to bond with her or make more of an effort to really spend time with her. Riley was more of a means to an end, meaning if Riley was Jamie's excuse for not being able to meet up with Derek, then Derek would welcome Riley along but not because he wanted to be with his ex's little girl. While Derek was my least favorite thing about the story, I did like Jamie and Riley was such a precocious princess who seemed to make a habit of being a scene-stealer. There weren't any unresolved issues and the story itself was paced quite well, making for a pretty good, quick read. I'm giving Not Another One Hit Wonder 3.5 out of five stars. ♥

Purchase Not Another One Hit Wonder on Amazon | B&N | Kobo.