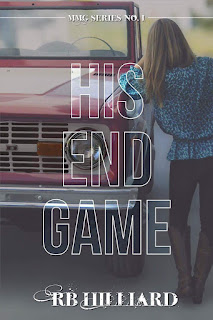 His End Game is a romance that starts off as a young adult (YA) story and ends as a new adult (NA) one. Written by RB Hilliard, this MMG series starter was originally released in early 2014 but is being re-released. Since I never got to read the book when it first came out, I can't compare that edition and this new one, so I wouldn't know if any changes were made, whether in terms of deletions or additions. My review is just for the 2016 re-released edition.

The first time Ellison Davis saw Max McLellan, she was a freshman in high school and he was a year ahead. When they finally got together a couple of years later, Ellie knew Max was it for her and she believed the feeling was mutual. He made her promises he swore he had never made any other girl and they planned to make their dreams come true. They were going to be together and Ellie thought it was forever...until the day Max left without a word.

She mourned his loss for five years. Now twenty-two, Ellie is ready to move on and let go of the what-ifs. She's got a new job, she's making new friends, and she's even connected with her estranged father. She also happens to have snagged the interest of a seemingly good guy. But something appears to be amiss and all her progress comes to a halt when her past--one that she hasn't heard from in five long years--decides it's time to stake his claim again.

Ellie and Max were young teens when they first noticed each other and were just a few years older when they fell in love and then later separated. Heck, they were only five years older when they saw each other again, so I got why there were times when they did and said things that seemed to be retaliatory or reactive rather than thought-out, but I also admit that this became frustrating, especially considering all the secrecy and lack of communication.

Things between Ellie and Max got intense really quickly as soon as they admitted liking each other and keeping tabs on one another when they were in high school and the same thing happened when they reunited. There was clearly no one else that could ever replace the other in their hearts, but the same thing didn't really apply when it came to their bed, which I understood to a certain degree--plus it was realistic--but I was also rather disappointed.

Even with the stuff I didn't agree with, there was no denying how into the story I was. Ellie and Max were on their separate journeys but their paths were always meant to not just intersect but for their final destinations to be wherever the other one was. They're surrounded by an attention-grabbing group of supporting characters whose own stories I can't wait to read, and RB Hilliard has made this two for two for me. His End Game receives 4.5 stars. ♥

Purchase His End Game on Amazon.