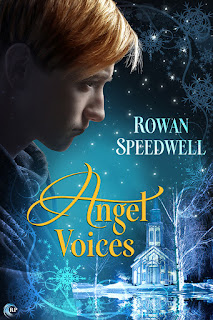 Angel Voices is a coming-of-age holiday novella from author Rowan Speedwell and it's the story of two college freshmen who just happen to be roommates, Will and Quinn. With school out for winter break, Will returns home only to be beaten up by his father who has inadvertently discovered that his younger son is gay. Will is kicked out of the house and walks the ten miles back to school. Badly injured and shivering from the cold, he makes his way to the school chapel where Quinn, his roommate, happens to be rehearsing with the choir. Quinn is taken aback by Will's disheveled appearance, but he wants to help in any way he can, even after they return from the hospital. Quinn is openly gay, but can he give Will what he needs, especially when Will's father decides to make his son see the error of his ways? Will Will finally stand up for himself or will he fold to the pressure of his homophobic father?

This was my very first Rowan Speedwell read and it was a quick one at that. I've been trying to get in more holiday reads with December right around the corner, and this novella was a pretty good one, although I did have an issue with how Will chose to handle what his father did to him and that isn't limited to his decision not to involve the authorities. I understand that his upbringing had a lot to do with his choice to remain silent, but there wasn't much encouragement from anyone for him to seek outside help in terms of the assault, and that's exactly what it was: assault. One of the things I did like, however, was how this wasn't a story about insta-love or one or both of them pining for the other--although Quinn has had a crush on Will for months. Overall, Angel Voices paid more attention focused on the "romance" aspect and I wish it had done so with the father's homophobia. I'm giving this four stars. ♥