Review: The Current Between Us by Kindle Alexander 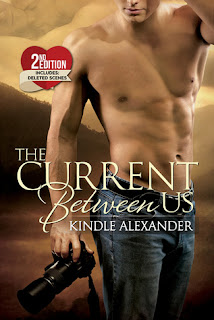 Bestselling M/M romance author Kindle Alexander's The Current Between Us was originally released in June 2013 and it's been re-released as a second edition that includes bonus material and deleted scenes plus a preview of the author's upcoming release, Painted on My Heart, which involves two minor characters mentioned here. I didn't have the privilege of reading the original release so I can't compare what the differences are between the two editions, so my review is based solely on what I read within this new edition, which I must confess, I quite enjoyed. This was the story of a single father who tries to lead a simple life for the betterment of his two children and the worldly man who changes everything and makes him want things he never thought he could hope to need or have.

Gage Synclair is a renowned investigative journalist who uses photos and videos as his main media. He's set to retire, but he intends to do so with the biggest story he's ever put together, one he's spent the last six years researching and keeping tabs on. He hopes it'll help land him a position as a broadcast journalist with one of the big news networks. In the meantime, he's got his art gallery opening to keep him busy, and finding an electrical contractor is at the top of his to-do list. Then he meets the new electrical contractor, Trent Cooper, and Trent becomes the one thing that Gage wants to do. The single father informs him that he isn't interested in anything casual, and the more Gage gets to know Trent and his family, the more he sees that he doesn't want casual either.

Trent Cooper keeps his life compartmentalized for a reason. When he took over the reins as primary guardian to his nephew and niece after the passing of his younger, widowed sister, he became determined to be the best possible father to Hunter and Emalynn. He's trying to establish his small company and bring in more clients, leaving little time for anything else other than his kids. When he takes on a new job at a gallery that's about to open, Trent is shocked to realize that the gallery owner is none other than Gage Synclair, whose work Trent happens to be an admirer of. The attraction is immediate and undeniable, but Trent isn't sure how a wealthy and well-bred guy like Gage could want to be with a blue-collared guy like him. How long can these two deny the current between them?

This book was mostly very sweet and romantic, with Trent and Gage moving from a lustful connection to one that evolved into love at a steady enough pace. I loved how both Hunter and Emalynn were such an active and integral part of what was happening between Trent and Gage. There were times that Gage was a tad too clingy; on the other hand, there were moments that Trent seemed to allow Gage to be bossy and take over everything. But I adored how Gage and Trent were so committed to their relationship with each other and with the kids. There were also a couple of twists that I didn't see coming. The second one had me so anxious, hoping everything would work out in the end. The bonus scenes added that extra punch to make The Current Between Us even better. Five stars! ♥

Purchase The Current Between Us on Amazon.