Review: What If It's Right? by J.B. Heller 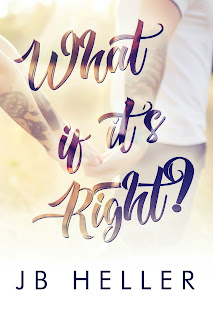 What If It's Right? is a romantic comedy standalone and my first read from J.B. Heller. It's the story of Victoria Dixon, who became her eight-year-old nephew Finn's legal guardian at eighteen after they both survived the car accident that took the life of Victoria's sister. Moving to a new town was the fresh start Tory and Finn desperately needed and they both found best friends in the form of single mother Vera Banks and her son Weston, who was the same age as Finn. Over the years, the bond between both families strengthens, but once Wes is old enough to know what--who--he wants, it causes confusion on Tory's part. Wes's flirting isn't as innocent as it used to be because this time around there's a lot of intent. While she would like nothing more than to reciprocate, friendships are at stake plus there's the ten-year age difference. Would it really be so wrong to fall for your son's best friend?

This was a story that was mostly told from Tory's end and while it was mostly a rom-com, there were heavier elements as well in the form of personal loss for more than one of the characters. A lot of the story is told in terms of whatever highlight or milestone Tory and/or Finn were experiencing that year, so this wasn't really the sort of storytelling that involved continuity, but don't take that to mean that it wasn't good. It had its high points, especially when it came to Wes and Finn and how Wes was more than the boywhore he once was and how Finn grew up to be good man. I liked that this wasn't just about love story between Tory and Wes; it was also about family and how the family we create for ourselves can stand tall and proud to what may be considered more traditional ones. All in all, What If It's Right? was a lighthearted look at love and family and I'm giving it four stars. ♥