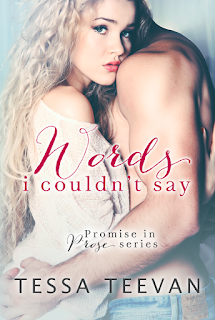 He'd given his dreams up to raise his little brother.

I'd left him for mine.

Why in the hell would he ever take me back?

Words I Couldn't Say is the first book in the new Promise in Prose series from author Tessa Teevan and is a spin-off of her much-loved Explosive series but this can absolutely be read as a standalone. It's a second chance romance between twenty-three-year-olds Tucker Manning and Ava Banks, childhood best friends who fell in love as teens only to have fate throw their lives in disarray, leaving them to lead separate ones for five years. From best friends to first loves to broken hearts, this is the story of a love borne of friendship that evolves into a romantic one; it's about a love that's lost because of letting go and not holding on and how, if it's the true kind, it'll find it's way back.

When Ava Banks walked away from Tucker Manning five years ago, she had always hoped they would be able to make things work again. But staying away from him was easier than having him so close yet not want to have anything to do with her when she came home. She went after her dream of college and conquering Hollywood, and that meant leaving behind the only boy she'd ever loved. Now, she's been offered the lead role in the film adaptation of the bestselling romance novel Those Three Words T.A. Bankman, which is set in her hometown. This gives her a chance to be with her family again...and hopefully, be that second chance to right wrongs with Tucker.

Tucker Manning let Ava Banks walk away from him five years ago and he told her he would never go after her. It's a mistake he wishes he could have rectified sooner, but the loss of his parents left him with only one choice and that was to give up his dream of going to California with Ava for college. He had to take over the family business and take care of his younger brother. Half a decade is a long enough wait, and Tucker's done waiting. He's poured his heart and soul into prose and while countless readers have fallen in love with the story he's written, there's only one person he wants to read it and Tucker hopes Ava realizes what it means--that those are the words he can't say.

Damn, but this story was such a refreshing change from the usual romantic fare I come across on a daily basis. The prologue had me in tears and that was both before and after I realized what I had been reading. Gah! A man who can translate into the written word what he isn't able to utter is as appealing to me as a man who can whip up moan-inducing meals. I'm the kind of person who's more comfortable writing what I think and feel than actually saying them out loud, so I more than got where Tucker was coming from when he wrote Those Three Words. On a side note, can I just say that I loved the cover for that fictional novel that the author shared via her Facebook group? I think it was a stroke of genius plus now I kinda want it to be an actual book too. Hint, hint, Tessa Teevan!

Tucker and Ava's story reminds one of how a love that can feel so right may not always be play out the way we want it. It's tested time and time again, and if it's the kind of love that can withstand these trials, then that's all well and good. However, sometimes the couple involved stumble and that doesn't mean that they don't love each other. Believe it or not, time and distance can often provide a better, less skewed perspective, and it allows you to grow and mature and to hopefully realize what it is you lost and how much you want it again. Tucker and Ava made mistakes because, after all, they're both human, but they learn and stand back up, and isn't that the best kind of love story? It's real and honest. This book also has the added benefit of being about family and bonus points points for the Backstreet Boys references because yes, I want(ed) it that way. Words I Couldn't Say garners five-plus stars. ♥

There was a lesson in the story I’d written. One my characters learned the hard way. I’d thought I had also learned it myself. I’d written the most tragic outcome that could befall a couple in hopes it would maybe touch one heart and that person, instead of letting love slip through his fingers, would hold on for dear life and never let go. None of us know when it’s our time to go. So, why waste the time we do have separated from the one we love the most?