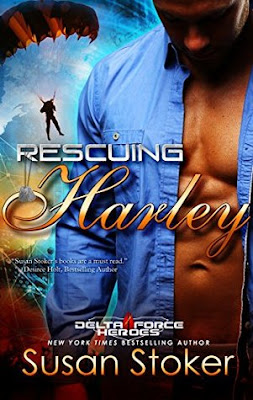 About Rescuing Harley
Video game coder Harley Kelso thought a tandem skydive would help her make her latest game more realistic. Instead, it literally put her in the arms of the sexiest man she’s ever seen. Geeky to the core, Harley is the polar opposite of big and burly Beckett, but that doesn’t stop her from wanting to play more carnal games with the sexy soldier.

When Beckett “Coach” Ralston offers to fill-in at a friend’s skydiving club, he doesn’t suspect he’ll meet a woman who will change his life and he definitely doesn’t expect her to save it. But that’s exactly what happens when an accident mid-air forces Harley to land them both safely. She’s earned Coach’s complete gratitude, and even more, sexual interest.

Until she disappears without a trace.

With Harley missing, a happy ending might not be in the cards for the man who loves her…especially when he becomes the main suspect.

New York Times, USA Today, and Wall Street Journal bestselling author, Susan Stoker has a heart as big as the state of Texas where she lives, but this all American girl has also spent the last fourteen years living in Missouri, California, Colorado, and Indiana. She's married to a retired Army man who now gets to follow her around the country.

She debuted her first series in 2014 and quickly followed that up with the SEAL of Protection Series, which solidified her love of writing and creating stories readers can get lost in.