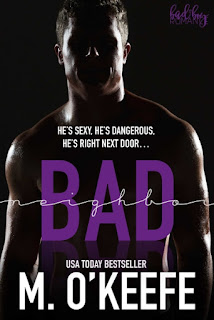 She's soft and has a certain lightness about her; he's hard and prefers the darkness that lingers within him. Charlotte, an graphic designer and illustrator and artist, has just moved into Shady Oaks, an area nowhere near where her beloved condo used to be it. But she sold her condo because her twin sister Abigail needed money to disappear, and Charlotte would give up anything and everything for her sister. Abby, of course, would never fathom taking it all from Charlotte, even if she offered. She would, however, take most of it. But then, that's how Abby was. Life in Shady Oaks is Charlotte's new normal and for as long as she had Izzy--her computer setup--with her, she would be okay. She wasn't exactly a people person, preferring to stay indoors and working on her latest book, meeting deadlines. Then she meets her neighbor, Jesse Herrera. He's the bad to her good and she wants him badly.

Jesse doesn't mix and mingle, but he's tempted to do exactly that with Charlotte. When he first moved into his apartment, he had no intentions of staying there permanently. But five years on, and he's still in 1A. One look at his new neighbor and he knows she doesn't fit--not in the apartment complex, not in Shady Oaks, and certainly not in his life. She's the kind of woman that deserves to have someone good in her life, and good is so far off Jesse's radar. But from the moment he helps her move into 1B, Charlotte becomes an unexpected fixture. He hears her through the thin walls that separate them and he can't help but keep an eye out for her. He doesn't want her exposed to the life he leads, not when he knows he could sully her. But when danger comes looking for, Jesse may be the only thing that could save Charlotte...or he may very well be the one person that'll leave her totally broken.

Bad Neighbor is the latest release from bestselling author M. O'Keefe, and once again, she's surprised the hell out of me with this book. There was so much more to this than Charlotte being an illustrator putting her sister ahead of her own future and Jesse being an underground fighter putting his brother and their past behind him. She's what he needs and he's what she wants, and while this could too easily labeled as a case of opposites attract, being with and around each other has them discovering things about themselves, things that they already knew but were afraid to ever acknowledge for fear of disappointment. Charlotte and Jesse were awkward and then they became intense, but there was nothing sudden about the shift, with that simmering attraction and more always between them. Bad Neighbor is a standalone but there is a second book coming out next year that I'm excited for. 4.5 stars. ♥