Review: After We Fall by Melanie Harlow 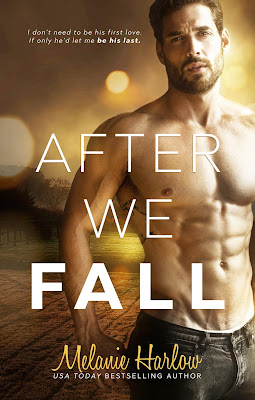 "I'm not asking for a promise, Jack. I'm asking for a chance. That's all. A chance." My heart beat frantically in my chest as he weighed my words against his misguided convictions. His lips trembled and slammed shut. His forehead creased. his fingers curled and flexed. I could see the struggle in him, the temptation to give in to me versus the strength of his guilty conscience. Which would prevail? Our eyes met, and for a second, I thought he'd choose me.

But he didn't. He looked away. Stared straight ahead. "I've got no chance to give you."

At nearly thirty, Margot Thurber Lewiston knows all to well what's expected from an heiress like her, especially as a Thurber. She dreams of being married with a brood of her own, but after one lackluster relationship that ended because her ex wasn't prepared to walk down the aisle anytime soon, Margot just wants to feel as if she's doing something worthwhile with her time. When she heads to Lexington from Detroit to be the point-person for Shine PR's new client, the last thing she expects is to be drawn to a surly and rude but handsome farmer in the form of Jack Valentini. A widower and military veteran, Jack isn't too keen on his siblings' plans to hire Margot for her marketing and PR skills. Margot, however, wants to prove to Jack that her being a city girl doesn't mean she can't help their business out. The more time she spends with him, though, the more she finds herself falling for the man.

It's been three years since thirty-three-year-old Jack Valentini lost his first love--the love of his life. Now, all he lives for is the family-owned farm, which he co-owns with his two brothers. When they inform him that they're bringing in a PR and marketing specialist to help drum up more revenue for the farm, Jack is livid. He feels as if they're messing with his dreams, dreams that he shared with his late wife, Steph. He refuses to even engage the clearly citified, pampered princess that is Margot Lewiston, but she sparks something in him that he hasn't felt since Steph was killed. As taken as he is by Margot, the feelings of guilt that weigh on Jack make it impossible for him to even contemplate having any sort of relationship beyond Margot's time on the farm. She wants a chance to prove to him they could have a life together, but Jack is terrified to give her that chance...because Margot may well be right.

After We Fall is contemporary romance novel from bestselling author Melanie Harlow. It can be read as a standalone but it is loosely tied to the author's prior release, Man Candy, since the female main character in After We Fall is none other than Margot Thurber Lewiston, who was one of Jaime Owens's best friends introduced in Man Candy. My wish that Jaime's best friends get their own happily-ever-afters has partly come true with this new release (and I'm already anticipating Claire French's story, which I hope will be up next!), and what a release it was. This still had some of the humor I've come to expect from Melanie Harlow's novels, and a lot of it was courtesy of Margot Lewiston. But this also had a heavier feel to it, and it had a lot to do with male main character Jack Valentini's past, making this a far more angst-driven stories from the author but still quintessential Melanie Harlow.

While the first two-thirds of the book focused on Margot and Jack navigating their way through whether they should explore the attraction and chemistry between them, I confess that it was the final third of the story that had my heart beating out of my chest. The mix of emotions that I was wading through were brought about by the impasse of sorts that this couple was confronting, and while I empathized where they were both coming from, I couldn't help the frustration bubbling within me when it came to Jack. Both the main characters were so painstakingly developed by the time we get to the end of the book, and I'm just glad that I was able to bear witness to how far they had come from two people who disliked each other and had both lost their way in life to a couple who overcame so much and found their way to one another. Five-plus stars for 2016 top read After We Fall. ♥

Purchase After We Fall on Amazon | B&N.