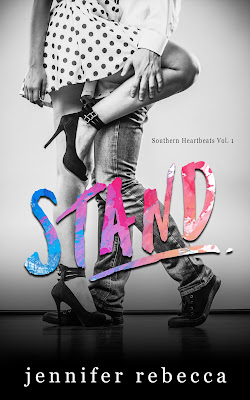 About Stand
Cody Reynolds had the world at the tip of his fingers: a beautiful fiancée, a promising NFL career, and a Super Bowl ring within his grasp. He was living the American Dream, until a tragic accident threatened everything he knew... Sending him home to Tall Pines, Texas.

The best pediatric trauma nurse in New York City, Angellica Andrews' life revolved around her career and her boyfriend. Until the night there was one more tragedy on the job--it seemed like one too many for her heart to take... Until her aunt convinced her to give Tall Pines, Texas, a chance for a new life. A new adventure.

What happens when the two people least interested in love meet in a small town?

Have you visited Tall Pines yet? 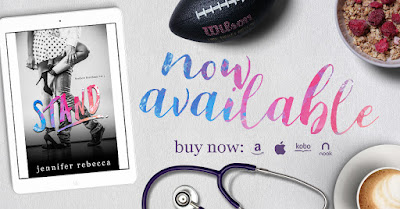 An Excerpt from Stand
Angellica

When we walked into Cody’s grandparents’ house everyone was already there and imbibing in the free flowing cocktails. I did not feel this boded well for the situation. The assembled crowd which included an angry looking Aunt Mable, both sets of Cody’s grandparents, his parents, a sour faced Joe, Sam and his wife, Holt, and the Mayor. Which I thought was weird. He looked to be his usual cranky self. Yay! How fun.

We were all called to dinner and sat around the long dining room table. Cody’s grandfather at one end, his grandmother next to him. Aunt Mable fought the Mayor for the other end of the table and won, he still sat next to her. Cody’s parents sat next to him and that left me to sit in between Joe and Cody. Fuck my life. Do you even wonder how you end up in certain situations? Well, lately, that’s every damn day of my life.

“Do you have any idea of what kind of a wedding you would like, dear?” Mrs. Reynolds asks me.

“I’m not sure yet. It all happened so suddenly,” I smile at her.

“Do you think you’d like to have the wedding here at the ranch?” His grandmother asks me hopefully.

“That sounds lovely!” Mable chimes in. I look to Cody for help but he just smiles indulgently at me.

“Angel can have whatever she wants. I’m just happy to be the man she’ll be meeting at the altar,” he says over the soup course. Deserter! Things went a little sideways over the prime rib and twice baked potatoes when the conversation turned to when.

“That’s a splendid idea! I think us ladies could put a wedding together for the beginning of June,” Mrs. Reynolds claps. “What do you say ladies?!” Which was met with raucous cheers from Cody’s grandmothers and Mable.

“Don’t you think this is all a bit sudden?” The Mayor snaps.

“I’m not sure how this decision concerns you,” Mable narrows her eyes at him and I can’t help but squirm. I see Cody flinch out of the corner of my eye, but he covers it well.

“That’s unfair and you know it,” he says softly. I feel a tingle along the back of my neck but don’t have time to put any thought in it because Joe chooses that moment to pipe up.

“I think the Mayor is correct. This is too sudden. You’re not thinking clearly, Angie. You’ve obviously been brain washed by this…this…sex fiend!” He shouts. I cringe and try and slither under the table but Cody stops my progress. One look at him confirms he’s smiling like a loon. Bastard.

“I don’t know what you’re talking about,” I hedge, hoping Joe will realize his faux pas, but he just keeps getting more and more angry.

“I fucking heard you,” he thunders. While I was sitting in the kitchen with your nut bag aunt.”

“This is true. I was pretty impressed,” Aunt Mable tells the table at the same time the Mayor shouts at Joe.

“Who are you to call anyone a nut bag? Actually, who the hell are you anyways?” He asks. “Actually, I don’t care. But if I ever hear you make threats or unsavory comment to Mable ever again, I will call the sheriff and have your ass thrown in jail.” The room was quiet for a bit until Holt chimes in.

“I’m the sheriff and things have been a little slow lately. I’d do it just for entertainment value,” Holt says honestly. I’m so stunned at the crazy turns this evening is taking that I’m shoveling in my dinner hoping no one will direct the conversation back to me. Unfortunately, my luck is still a flaming pile of Steve’s crap.

“You should slow down on the potatoes, Angie. Actually, you shouldn’t eat them at all if you ever want to shed some of that fat,” Joe says to me. And you could hear a pin drop.

“I think it’s time for you to go,” Holt says quietly, but firmly. “If you’re nice I’ll drive you to the airport. If you continue to be a jackass, I’ll take you straight to jail.” Joe just stands, dropping his napkin on his plate and follows Holt out the door. We all sat there in silence for a few minutes before I turned to Cody, not quite meeting his eyes.

“I’d like to go now,” I say softly, humiliated.

“Nonsense!” Principal Reynolds booms. “What you need is tequila,” which magically manifests in front of me. I immediately shoot it back and Cody’s grandfather fills my glass back up. I shoot that back too.

“I think I’m ok now,” I rasp as the booze sears across my chest.

“Not yet but you will be soon. What an asshole. Let’s get the cake, love. We’ll all feel better with cake,” his grandfather says. I’m not so sure. I’m feeling a little green around the gills.

“Definitely. What her ass needs is cake. What a moron. I would feed an ass like that every day,” Cody’s dad says as his wife slaps his chest. “What? It’s a fantastic ass. Mark my words, son, don’t let her lose that ass.” My face is beet red and I will never be able to look anyone in the eye ever again. I feel Cody’s body shake with laughter next to me.

“I won’t dad. In fact, I had that very thought the first time Angel joined Holt, Sam, and me for pizza at Father’s,” he tells the table. I just throw my head back and laugh because every word he spoke rings absolutely true.

About Jennifer Rebecca
Jennifer Rebecca is a 32-year-old lover of words, all words: the written, the spoken, the sung (even poorly), the sweet, the funny, and even the four letter variety. She is a native of San Diego, California where she grew up reading the Brownings and Rebecca with her mother and Clifford and the Dog who Glowed in the Dark with her dad, much to her mother’s dismay.

Jennifer is a graduate of California State University-San Marcos where she studied Criminology and Justice Studies. She is also a member of Alpha Xi Delta.

10 years ago, she was swept off her feet by her very own sailor. Today, they are happily married and the parents of a 7-year-old and 6-year-old twins. She can often be found on the soccer fields, drawing with her children, or reading. Jennifer is convinced that if she puts her fitbit on one of the dogs, she might finally make her step goals. She loves a great romance, an alpha hero, and lots and lots of laughter.