Review: J.C. and the Bijoux Jolis by Katy Regnery (Rousseaus #3) 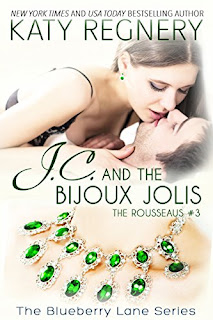 After having finished two series, one involving the Winslows and the other the Rousseaus, and still going strong with her ongoing a modern fairytale series, to say that Katy Regnery has yet to disappoint me says a lot. She's already on the road to becoming a prolific author and yet none of the books that I've read so far share the same story lines. She's given fans and readers yet another uniquely engaging and endearing story with the third and final book in the Rousseaus section of her Blueberry Lane umbrella series. With three of the four Rousseau siblings having found their happily-ever-afters with their respective partners, all that's left is Jean-Christian, who doesn't seem to be in any rush to commit himself to one woman, what more put a ring on her finger and walk down the aisle. There's no denying, however, how intrigued he is by one Libitz Feingold, who just happens to be the maid of honor of his brother's bride and partnered with best man J.C. As they work together to solve the mystery of an old painting, these two people who were once at each other's throats may fare better claiming one another's hearts.

J.C. and the Bijoux Jolis had an air of mystery to it that made for a highly exciting read and when you mix that in with Katy Regnery's patented brand of romance, there was just no feasible way for me not to fall in love with J.C. and Lib's story. The bickering and the banter were just part and parcel of what made this couple wholly entertaining. They had their differences--both the kind that was easily overcome and the kind that was so innate and fundamental to them as individuals that compromise and acceptance were necessary if they had any hope of actually being together. But see, that's what I loved about these two. The things that would have broken other couples ended up strengthening J.C. and Lib's resolve to look beyond what they considered mundane compared to what really mattered--their love for each other. Aside from their love story, there's another side love story that had me grinning like a fool, and the author deserves kudos for the way she melded these two tales of love overcoming all else in such a seamless manner. J.C. and the Bijoux Jolis was the ideal end to yet another great series. Five stars. ♥

Read my reviews for the Rousseaus series:

Jonquils for Jax (book one) - five-plus stars - My Review


J.C. and the Bijoux Jolis (book three) - five stars - My Review (posted above)

Purchase J.C. and the Bijoux Jolis on Amazon | B&N | Kobo.