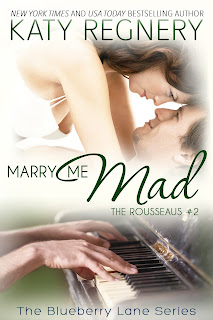 Marry Me Mad is the second novel in the Rousseaus series, which is the third series in the Blueberry Lane umbrella series from bestselling author Katy Regnery. Madeleine Rousseau is the twin sister of Jacqueline, whose story was told in the first book, Jonquils for Jax. Mad shares her her love story with Cortlandt Ambler, who was Jax's boyfriend for a couple of years when they were teenagers. When Cort and Jax ended things, the reason given was Cort was pressuring Jax to have sex even though she wasn't ready, causing Mad to think of Cort as a really bad guy and whatever friendship they used to have ended then and there.

Years later, Mad discovers that her boyfriend of three years is cheating on her, and Mad ends up in a bar...the same bar where Cort is performing as part of a musical duo. Mad believes she shouldn't have anything to do with her sister's ex, but when Cort rescues her from a disastrous evening, they forge an unlikely friendship, one that quickly evolves into much more than Mad was ever expecting, especially with someone like Cort. But then it's not as if she's going to end up falling in love with him, because something like that would be beyond the realm of possibility, especially after what he did to Jax...right?

Let me get this out of the way: I LOVED CORT. As in, I adored the guy. He had a musician's spirit and expressed so much of himself in his music. The one thing that could compete with his love for music was his love for Mad, especially since he's loved her for so darn long! The guy won my heart, just like Gardener Thibodeaux did in Jonquils for Jax. Ah, these men the Rousseau sisters have fallen for are extraordinarily devoted. There was a number of points in the story where I felt my heart squeezing in empathy for Cort and I understood how Mad was reacting and acting the way she was. After all, her first loyalty was to her twin, and Mad wasn't aware of the entire story behind Cort and Jax's relationship and it's supposedly bitter end.

I liked Jax in book one, but can I just say that she lost a couple of points here as far as I was concerned? It was one thing to do what she did when they were teens, but years have passed and in all that time, she never shared with her twin--the person closest to her--the truth? Argh! It was super frustrating and if she were my sister, I would have probably done a bit of hair-pulling. Immature, yes, but Jax's lack of disclosure led to a lot of unnecessary heartache for two people, and it really was rather selfish of her. That ending, however, more than made up for Jax's bad behavior, because this was, for all intents and purposes, about Cort and Mad getting their happily-ever-after. Marry Me Mad gets five out of five stars, with four of those due to Cort alone. Hehe. ♥