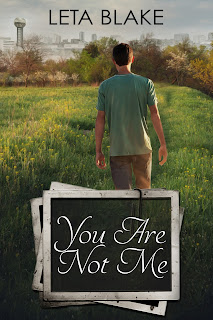 You Are Not Me is the second novel in author Leta Blake's four-part '90s Coming of Age series and it picks up where its predecessor, series starter Pictures of You, left off, with eighteen-year-old Peter Mendel starting his summer with still more questions than he has answers about the state of his life. He met and fell for Adam Algedi during their senior year of high school, and Adam was such a fixture in his life. But Adam is spending his summer in Italy with his family, leaving Peter unmoored but trying to secure promises from him before they parted ways. Without Adam by his side, Peter's curiosity leads him to see what life is a gay man is like without having to hide who he really is. This time, it's twenty-two-year-old college student Daniel McPeak who's by Peter's side, the same Daniel that has snagged his attention time and again. He's older and out, and there's no denying that Peter more than looks forward to being with and around him. Then there's Adam, and what they have remains a big question mark. Daniel wants Peter. Adam does too. Maybe. And Peter? He's not so sure what he wants and if he can really have it.

Ah to be a teenager and have the weight of expectation on you. But the expectations people have of you shouldn't outweigh nor overwhelm the expectations you should have of yourself. Peter is unsure of how to live his life as a young gay man because he's spent most of it in secret, having to take into consideration how being out would affect Adam. Peter also happens to be at that age where he wants to test his boundaries and with Adam in Italy, he gets to do exactly that, and it's Daniel who occupies a lot of his thoughts. Daniel is everything Adam is not, but I'm not saying that Adam is a bad kid. He isn't. What he is is confused and lost and unable to really decide if being honest about who he is is something he can live with...or without. Peter is forced to make some difficult choices in this second in a series, and feelings are bound to be hurt--both his own and those around him. The ending in You Are Not Me is less of a cliffhanger than the one in Pictures of You but because I know we're just halfway done with Peter's story, I'm cautiously optimistic for one couple while hoping one individual gets his act together. Five stars! ♥

Read my reviews for the 90s Coming of Age series:

Pictures of You (book one) - five stars - My Review

Purchase You Are Not Me on Amazon.