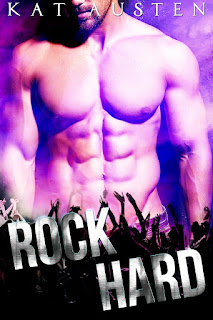 Rock Hard is a second chance romance from author Kat Austen and it's the story of two musicians who fell in love as teenagers only to be ripped apart by the girl's parents who didn't see her first love as worthy of being with their daughter. Eight years later, Elodie Taylor is a successful classical pianist who tours concert halls, but she's yet to give her heart to someone, knowing full well that it still belongs to the boy she once--and always will--love. When she finds out her current boyfriend has been cheating on her, Elodie's best friends decide it's time for her to let her hair down and take her to a rock concert, something she hasn't done since she was seventeen. My Mortal Affliction has an immense fan following and Elodie's excited to listen to their music, but one look at the lead singer and she recognizes him immediately. Caspian Cruz is now a rock star, and now that he's found her, he won't let go.

This latest release from Kat Austen definitely ranks as one of my favorite reads from the author, with a story about finding a love that was lost in the most public of ways. Elodie and Caspian loved one another but their relationship came to an end because of Elodie's parents. Fast forward eight years later, and Elodie and Caspian meet again, and it's that reunion that had me grinning in delight. It was headed in that direction so I wasn't surprised when they saw each other again. However, how Caspian decided to handle that situation was something I hadn't seen coming, and when you get to that part, you'll see why I grinned. It really was rather cute. Overall, I liked where the story went and I really appreciated that this wasn't an insta-love kind of story. While this isn't my top Kat Austen pick, it tie one other title for second. If you like rock romances and quick reads, give 4.5-starred Rock Hard a whirl. ♥