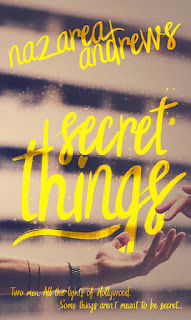 Secret Things is the first book in author Nazarea Andrews's new series, Hollywood Secrets, and it's an M/M contemporary romance with a bit of suspense thrown into the mix. Dimitri Blackwood and Camden Martin are best friends having met through Fractal Ends, a scripted urban fantasy television with both a devoted following, high ratings, and recognition from critics. They're both in committed relationships--Dimitri with Victor Vanes, lead singer of the Silence of Screams band and his boyfriend of ten years, and Camden with Carissa Aukes, Fractal Ends co-star and his girlfriend of several years. With success and security in their personal and professional lives, Dee and Cam should be basking in happiness...only they aren't. Dee and Vic's relationship is in limbo and Cam and Cari's isn't what it seems. Dee can't stop thinking about what it would be like to be with his best friend and Cam shares the sentiment, except neither one speaks about it or even acknowledges the possibility of it existing. When they do cross the line, it's kept secret, but one fan decides not even true love should mess with Victri and Cariden.

Fame and fortune do not guarantee forever-afters, neither does it guarantee that secrets you want hidden will remain so. I liked this love story between two best friends who've had feelings for one another for quite some time but aren't able to really do much about it until they decide they're done staying silent. There's a lot of push and pull when it comes to Dimitri and Camden, mainly because Dee is in a relationship with Victor and Cam isn't out in terms of his sexuality. Their love story is complicated, but they do genuinely love each other, so you can't help rooting for them to get their happy ending. I liked the most prominent supporting characters in this story--Carissa and Victor--and while Vic appears to have moved on, I'd still like to see how that turns out, as well as if Carissa will find love. Then there's Tristan Emery, one of Cam's closest friends, and I'm curious about him and what I think are unrequited feelings. This series starter not only gives a good love story between Dee and Cam, but it's got me intrigued about who's story is up next and what secrets will be revealed in book two. Four stars for Secret Things. ♥