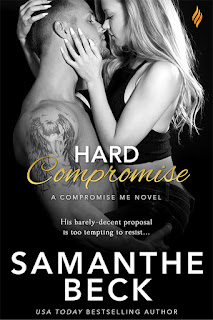 When sixteen-year-old Lauralie Peterson was caught at an adult party that was serving drinks just as she was trying to hook-up with a guy older than her, she thankful that it was twenty-two-year-old Montecido deputy Ethan Booker who decided to give her a warning and take her home instead. She tried to repay his kindness the only way she knew how, but Ethan was too much of a gentleman to prey on her and walked away by saying they would revisit it a decade. Over the next ten years, Ethan has watched Laurie grow up in more ways than one and when those ten years are up, he decides it's time to make his claim. Laurie sees their night together as a hook-up--albeit a hot and unforgettable one--while Ethan sees it as the beginning of a world of possibilities. He may be forced to take extreme measures, but Ethan intends to show Laurie that what they have isn't some temporary compromise.

I've been waiting for the release of the second novel in the Compromise Me series ever since I read Compromising Her Position in November 2015. It's been a year-long wait but bestselling author Samanthe Beck made it more than worthwhile because Hard Compromise was a great follow-up to the series starter! The beginning of Laurie and Ethan's story was a memorable one and hello, once that decade-long embargo was over and done with, talk about making up for lost time. These two were unbelievably hot. I couldn't get enough of them, but I'm not just talking about the steamier scenes. I loved the banter and exchanges these two had going on. Their relationship was a long time coming so there was nothing instant or sudden about it. We get to see how it evolves the more they spend time together. Ethan and Laurie's story wasn't just about them accepting the other but also accepting themselves.

Laurie was a self-sufficient woman who liked to stay in control of her world and not be reliant on anyone. Even when circumstances force her to accept help, she makes sure that it isn't an act of charity. Her manipulative mother was someone I wish she could have turned her back on more easily, but Laurie was truly a good person that even after everything her mother had done, she simply couldn't say no to her--which was, of course, rather frustrating after a time. And then there was Ethan who was just...goodness...super le sigh. The guy was a cut above the rest. He saw who Laurie was and loved and accepted her wholeheartedly. He was this genuinely loyal and loving guy who would go above and beyond for those who meant the most to him. I wonder if Santa would give me my own Ethan Booker this Christmas...but I'll make do with reading about him in Hard Compromise. Five stars! ♥

Read my reviews for the Compromise Me series:

Compromising Her Position (book one) - five stars - My Review