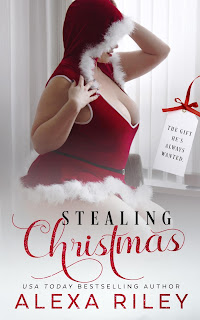 
Christmas Winter loves her job decorating the local Light Mall for holidays and events. Nothing brings her greater joy then spreading cheer to everyone she comes across. She isn't looking forward to going home and spending Christmas alone, so when she's informed that she's been called to the mansion of Nicholas Light, who happens to own all the Light Malls and a ton of other real estate, she's excited to see if she can bring a bit of joy his way. And indeed, Nicholas is looking forward to finally having Christmas before him. He's spent a great deal of time watching over the curvy beauty ever since he first saw her in one of the mall's security cameras. Nicholas, too, knows what it's like to be alone, but he's determined to steal Christmas's heart so that neither of them have to be alone again.


Stealing Christmas is the latest novella from bestselling author Alexa Riley and it's a holiday story, one that has a main character named Christmas and another named Nicholas. A tad too cutesy, but hey, it's the holiday season and I'd rather have characters with those names come out now than, like, over the summer. The story itself had enough about it to give it some uniqueness even with the more familiar stuff thrown into the mix. There's insta-love, so if you're not a fan of that, you may want to look at other potential Christmas romances. However, let me just point out that the chances of you getting an insta-love story are higher when it comes to novellas this short so it shouldn't come as some big surprise. With good amounts of nice and naughty, Stealing Christmas gets four stars. ♥