Review: A Family for Christmas by Jay Northcote 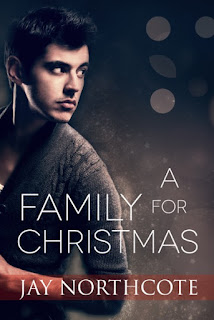 
People have their own holiday traditions, but I do believe that the one constant for majority of them is how the holidays--Christmas and New Year's--is about family. Even that aspect has changed over the years on my end, what with some family members now living halfway 'round the world, but we've always found a way to be together, even if it is virtually. Family, more often than not, has come first, especially during the holidays, so author Jay Northcote's holiday release, A Family for Christmas, resonated with me. It's the story of twenty-four-year-old Rudy and twenty-two-year-old Zac, both working for Rainbow Futures. From the moment Zac began working for the charity as the new social media and public relations manager, Rudy's been smitten. Being too shy to actually engage the very solitary Zac makes it difficult for Rudy to get to know his crush better, but during a rare night out with the rest of the Rainbow Futures staff, Zac actually hangs out with Rudy. Upon learning that Zac is spending Christmas alone, Rudy invites him along to spend the holidays with his family, the kind gesture has Rudy's family assuming they're together. But can the magic of the holiday season transform something fake into something real?

This Christmas story was all kinds of cute, with the adorably awkward Rudy and Zac the loner, but it also had elements that brought a tear to my eye, especially when it came to Zac's history and why he is the way he is when it comes to people. The whole fake relationship story angle has been played out time and again in many a book, but not once was I bored with how it was presented here, and that had a lot to do with the cast of characters. From the main men--Zac and Rudy--to their officemates at Rainbow Futures and Rudy's family in Tiverton, I found myself enjoying the company of these fictional lot because it was as drama-free as you could get. Okay, there was a bit of drama but nothing that felt contrived or off-putting. And there were four-legged furry cuties thrown into the mix, as if the memorable humans weren't enough! Jay Northcote's Christmas story is the kind of Christmasy read that you want to curl up with during these cooler days because if you're like me, this touching story will warm your heart and have you wanting to snuggle closely with someone this Christmas. Five stars for A Family for Christmas. ♥

Purchase A Family for Christmas on Amazon.