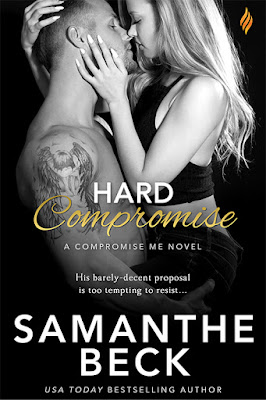 Laurie Peterson assumes her impulsive one-night stand with sinfully sexy Sheriff Ethan Booker is the biggest surprise of the year…until her bakery burns down while she’s basking in the afterglow. It looks like her dreams are up in smoke, but then Ethan proposes a deal too tempting to resist.

Ethan has no intention of settling for a one-night stand with Laurie. Nor does he want anything to do with the women his wealthy family wants him to meet. Not when he’s waited ten years for his chance to make his move. His deal might have strings—and Laurie may not know the stakes—but nothing will stop this sexy cop from staking a real claim on her body and her heart.

Find the Compromise Me series on Goodreads.

An Excerpt from Hard Compromise
She turned on less than steady legs and walked to the other side of the room, feeling the weight of his stare on her the entire time. Once there, she planted her feet hip’s distance apart, bent from the waist, and rested her forearms on the bed. “I trust this is interesting enough for you?”

His footsteps fueled her adrenalin. She lowered her head to the mattress, and lifted onto her toes.

“It’s definitely a start. Hand me my belt.”

She raised her head as a hundred imaginary feathers fluttered down her spine. “Your...what?”

If she wasn’t in the mood for this, all she had to do was say so. Booker would let it go, without question. Even knowing this, backing down felt too much like surrender. She handed the strap to him, but couldn’t help adding a caustic comment. “Who would have guessed there were fifty shades of Sheriff Booker?”

His soft laugh stirred invisible molecules in the air around her. “I would never do anything so conventional. Besides”—he folded the belt in half and ran the edge along the back of her thigh—“I think you secretly prefer gentle.”

“I told you before, you don’t have to be gentle with me.”

“You’re tough, huh?” The edge of the belt tickled her skin again.

She faced front and held her position. “That’s right.” Dammit, she was her own worst enemy.

Wine lover, sleep fanatic, and USA Today bestselling author of sexy contemporary romance novels, Samanthe Beck lives in Malibu, California, with her long-suffering but extremely adorable husband and their turbo-son, Hud. Throw in a furry ninja named Kitty and Bebe the trash talking Chihuahua and you get the whole, chaotic picture.

When not clinging to sanity by her fingernails or dreaming up fun, fan-your-cheeks sexy ways to get her characters to happily-ever-afters, she searches for the perfect cabernet to pair with Ambien.