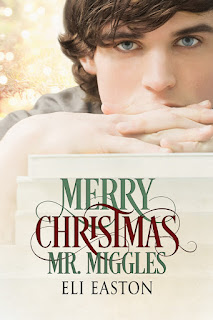 I wasn't going to let him disappear, let him vanish from my life like a story I'd read long ago. The mere thought caused a surge of dread. The life that stretched out before me without Sean Miggles in it was a bleak one. Who would be my library ninja then? Sandy Lake's knight errant? Who would keep me on my toes? Make literary remarks that had me gushing all warm and fond inside? Be the most secret wish of my heart?

You expect Christmas-themed stories to always end happily, but I do love it when an author adds a twist or two in order to give their readers that extra oomph to, almost like a Christmas present of sorts guaranteed to leave them satisfied and with a smile on their faces. That's exactly what Eli Easton's done with her holiday story, Merry Christmas, Mr. Miggles, which is set in the town of Sandy Lake. Twenty-four-year-old junior librarian Toby Kincaid enjoys working in the Sandy Lake Library and with head librarian Mr. Miggles, who's a decade older. Sure, he may always look serious and steadfast--and a hint of sadness--every single day, but when the holidays roll around, Sean Miggles has a spark in his eye, making him even more adorable. This year, however, that spark is doused when Sean is accused of a crime he didn't commit, which leads to Toby being left with no choice but to take over Sean's role in the library. But when it becomes clear that not only is Sean's freedom, reputation, and career are at risk but also the library itself, Toby does whatever is necessary to save Sandy Lake Library and the man he's been falling for.

This is only the second Eli Easton book that I've read and this is so different from the first one--Falling Down--in terms of feel, what with Merry Christmas, Mr. Miggles a far lighter read, and yet they share distinct similarities, such as the exceptional writing and character development. Toby and Sean are that unexpected couple, the one that you couldn't imagine actually getting together but when they do, it's as if they were always meant to be and it just took everyone else--including them--to catch up to the notion. Theirs was a slow burn romance, but the wait was more than worth it, and if there was ever a grand gesture worthy of a standing ovation, it was what Toby did for Sean. Everything in this story ties together, so there isn't this side story going on because what was happening to Sean was connected to what was happening to the library and what was happening to the library affected the town as a whole. Going to the library while I was a student was a highlight of my daily routine and it reinforced my love for literature. I miss the visits, so Merry Christmas, Mr. Miggles perfectly hits the holiday spot. Five-plus stars. ♥