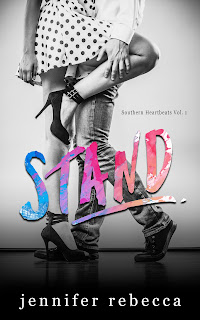 Stand is the first book in the Southern Heartbeats series from Jennifer Rebecca and is novella in length. I felt as if this book should have adhered to the its own title and taken some sort of stand as to what genre it was under. It was slapstick comedy that switched to angsty, heavy drama and while I honestly tried to get on board with how in-your-face the main characters were, it just got tiresome trying to keep up with them and their personality shifts. Instead of coming off as quirky, majority of the cast of characters seemed like they needed to go make appointments with a psychiatrist. There were twists that felt as if they were inserted here and there in order to add drama, but it was the kind of drama that I couldn't get behind because it honestly felt like it was too out there.

Angellica Andrews was a nurse having a supposedly clandestine relationship with her boss but she catches him cheating which leads to her walking out, not just on him but on her patients as well. Erm. Okay... Then she applies for a job in the town of Tall Pines in Texas and it becomes the most unprofessional job interview I've ever come across and I guess it was trying to be funny but it just...wasn't. And who just happens to be working as a coach in the same school where she's now a nurse? Cody Reynolds, the same NFL player who was in her ER but who she has no recollection of. Cody was often this overly anxious guy pining over Angel/Angie, making him come off as insecure. I did like, though, how he would turn to his dog for advice, so he wasn't all that bad. Cody, not his dog.

I received an ARC to review, and while I try to not say anything in my reviews about editing issues when it's an ARC, I just wanted to point out a couple of things. There was a tendency to be repetitive as well as a misuse of words, for example, using "alter" instead of "altar" when talking about the location where a bride and groom meet in church. This could have benefited from several rounds of editing, not only when it came to grammar and such but the actual flow of the story as well as character development. The insertion of their exes, just like the instances of the twists included, didn't really make sense because it was like they were thrown in for additional conflict and intrigue but not providing much of either. I'm giving Stand two stars, and I can't say if I'll be continuing this series. ♥