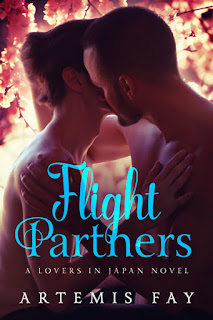 Flight Partners, the first novel in the Lovers in Japan series penned by Artemis Fay, is the story of two expats who are in Japan to work as ESL (English as a Second Language) teachers. Andy MacKinnon and Kenneth Ohno's first meeting is a memorable one, sitting side by side on a flight from Chicago to Osaka. Andy's fear of flying has Kenneth trying to distract him and it's a distraction that makes it clear that there's an actual connection between the two of them. But after they nearly get caught doing something they shouldn't be doing on the plane, Andy's just glad that humiliating episode is behind him and he won't have to see Kenneth again. And then he does. Why? Because Andy's new co-worker at Code English is none other than Kenneth. Oh, and they'll be roommates as well. With ground rules in place, maybe they'll be able to survive being stuck together. But rules are meant to be broken, right? And when it comes to whatever's brewing between Andy and Kenneth, those rules are bound to be broken.

I was an ESL teacher for three years in a Korean-owned English academy here in my country, and while I ended up filing a case against my former employers because they didn't follow our labor laws, I do have fond memories of my time then, thanks to co-teachers who became true friends and students who took a piece of my heart when they left. So, Andy and Kenneth being ESL teachers was something that resonated with, regardless of me being in my home country teaching Koreans while Andy and Kenneth were in teaching Japanese students overseas. Admittedly, Andy took a while for me to actually summon some affection for. He was abrasive and his attitude towards and treatment of Kenneth was unfair, considering Kenneth wasn't the one who fucked him over. It also says a lot when majority of the people you're around choose to see you as the bad guy instead of the actual bad guy. But grow on me Andy did, and Flight Partners was an overall good read that I did end up enjoying. Four stars. ♥