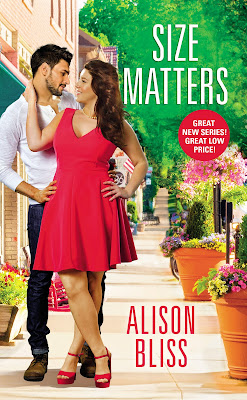 About Size Matters
The rules of (fake) engagement . . .

Leah Martin has spent her life trying to avoid temptation. But she's sick of low-fat snacks, counting calories, and her hyper-critical mom. Fortunately, her popular new bakery keeps her good and distracted. But there aren't enough éclairs in the world to distract Leah from the hotness that is Sam Cooper—or the fact that he just told her mother that they're engaged . . . which is a big, fat lie.

Sam sometime speaks before he thinks. So what started out as defending Leah's date-ability to her judgmental mother soon turned into having a fiancée! Now the plan is to keep up the fake engagement, stay "just friends," and make Leah's family loathe him enough to just call the whole thing off. But Sam has an insatiable sweet tooth, not only for Leah's decadent desserts but her decadent curves. Her full lips. Her bright green eyes. Yep, things aren't going quite according to plan. Now Sam has to convince Leah that he's for real . . . before their little lie turns into one big, sweet disaster. 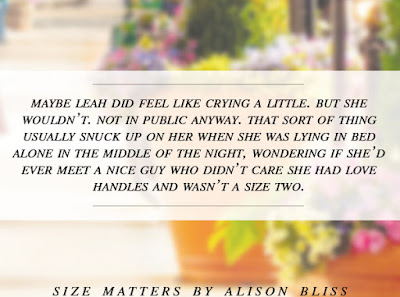 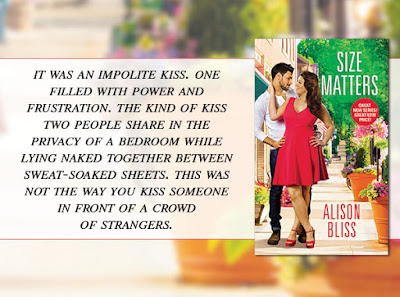 An Excerpt from Size Matters
Leah Martin nearly choked on her beer.

“What do you mean just pick one?” Her eyes scanned the entire bar before settling back on her friend. “Pick one what?”

Yeah, because it was just that simple. For Valerie, maybe. Even though they were close in size, Valerie always wore her weight better and turned heads everywhere she went. It probably helped that she had expressive doe eyes, wavy platinum-blond hair, and looked more like a cutesy toy poodle any guy would give their right testicle to take for a walk.

“I hate to tell you this, Val, but that only applies to women who look like you.” If Leah had to classify herself in that same frame of reference, she’d accurately describe herself as a Bulldog. Not only did she have the breed’s innate stubborn streak, but she also had the matching broad shoulders, wide hips, large chest, and—if she didn’t lose a few pounds—probably the same short life span. “Hippy brunettes with body image issues and smudged eyeliner don’t get the luxury of just pick one.”

Yep, that about sums it up. My eyeliner is the only thing that looks decent on me tonight.

The little black dress she wore was just that—too little—and was slowly squeezing the life out of her. Especially after packing on ten extra pounds in the last few months. The sheath of fabric clung to every curve, as well as every bulge. Thank God they lived in Texas instead of Alaska or an Eskimo might’ve mistaken her for a seal and tried to skin her.

“So what’s your pleasure?” Valerie asked, not giving up. “Plenty of gorgeous men in here tonight.”

“Okay, stop being negative. You’re gorgeous, and lots of men love curvy women. I should know. Now pick one.”

No point in arguing with her. Once Valerie set her mind to something, she didn’t stop until the mission was accomplished. But the only time Leah had ever had her pick of anything was when she stood in front of the doughnut case at work, deciding between a chocolate éclair or a cream cheese danish.

“How am I supposed to know who to pick? It’s not like they wear signs on their foreheads saying, ‘I dig fat chicks.’”

Valerie shot her an exasperated look. “We’ll just establish a baseline for the kind of guy you want.”

“The kind of guy I’d want wouldn’t be hanging out in a bar called Rusty’s Bucket. In fact, I wouldn’t be here either if you hadn’t forced me to come.”

“Leah, you got dumped. Happens to all of us sooner or later.” Valerie’s voice softened as she reached for Leah’s hand. “It sucks, I know. But you’re always at work or upstairs in your apartment, which means you never leave that damn building. It’s not healthy. You can’t hide out forever.”

“I’m not hiding. I’ve just…been busy. I never imagined I’d be this swamped only a month after grand opening, and I’ve had to put in a lot of extra hours.” Leah caught Valerie’s I’m-not-buying-it expression. “Come on, Val. The wedding is tomorrow night. Everything has to be perfect because...well, you know.”

Valerie rolled her eyes. “Why does it even matter?”

“Because my reputation is at stake. It’s my cake the happy couple will be stuffing into each other’s mouths. They can choke on it for all I care, but it’s going to be the tastiest damn wedding cake they’ve ever eaten while keeling over. Everything has to go as smoothly as possible, and I have a million things to do before tomorrow night. I still need to—”

Valerie raised her hand to stop her from continuing. “What you need is a break. Let’s find some guys to dance with and have a few hours of fun before you lock yourself up in the cave again. Just humor me, okay? Now, what would say your dream guy’s most attractive quality would be?”

“No vampires. Check. What else?”

“I don’t know. This is stupid.” Leah caught the disappointment in Valerie’s eyes and groaned. “Okay, fine. I guess I’d want…”

Her gaze sifted through the crowd, landing on two men at the bar. While the one standing motioned to the bartender, the other rolled up the sleeves of his blue button-down shirt, drawing Leah’s attention to his tanned, muscular forearms. When he finished, he bumped his elbow against the other man’s ribs and said something that made them both laugh. The warm, amused smile he wore sent a zing of pleasure through Leah, like she’d been given an intravenous shot of serotonin. Him. I’d want him. 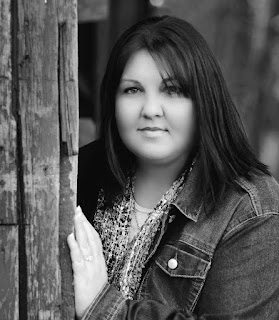 Alison Bliss grew up in Small Town, Texas, but currently resides in the Midwest with her husband and two sons. With so much testosterone in her home, it's no wonder she writes "girl books." She believes the best way to know if someone is your soul mate is by canoeing with them because if you both make it back alive, it's obviously meant to be. Alison pens the type of books she loves to read most: fun, steamy love stories with heart, heat, laughter, and usually a cowboy or two. As she calls it, "Romance...with a sense of humor." 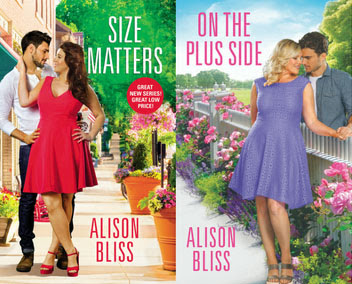 A Q&A with Alison Bliss
1. What was your inspiration behind Size Matters?

There were so many things that inspired the idea for this book, but two stand out above the rest. Not only did I love the idea of writing about a heroine with body issues—one who I feel many women can relate to—but I also wanted to show that women aren’t the only ones who worry about their “size.”

2. With film and television having curvier women in more prominent roles, do you think that more needs to be done in the world of literature to follow suit?

I think there have been some great strides in showcasing curvier women in film and television roles, as well as other fields. Like earlier this year when Sports Illustrated featured a plus-size model on their cover for the first time ever. But I also think there’s plenty of room for improvement. I would love to see a big-box romantic comedy feature a sexy plus-size woman as the hero’s love interest!

3. What's your go-to pastry or baked good and why is it your favorite?

I have a deep love for ice box pies, which are basically a cross between a cream pie and a cheesecake. It’s a family recipe passed down by my aunt who, unfortunately, is no longer with us. I usually make strawberry or blueberry ice box pies, but cherry occasionally sneaks into the mix. They’re super simple to make and require zero baking, which is perfect for when you’re in a hurry. During the holidays I’ve been known to make several batches of pies and hand them out to friends. Everyone loves them.

4. If you could spend an entire weekend all to yourself, free of personal and professional responsibilities, what would we find you doing?

5. What words of wisdom would you share with aspiring authors who look up to you as their inspiration?

My best advice is to never give up. I fully believe that persistence is the key to being successful in most things, but I find it especially true when it comes to writing a book. Writing is not easy. You are going to have moments when you want to quit. Don’t. Instead, push your way through the muck and keep going. You’ll thank yourself later.

Thank you to Alison Bliss for taking the time to answer my questions and to Michelle Cashman for facilitating. ♥ 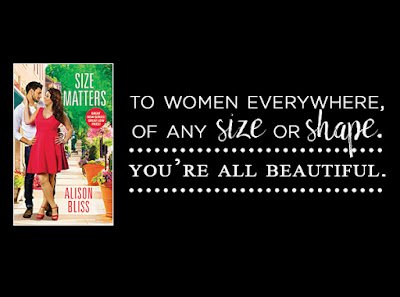