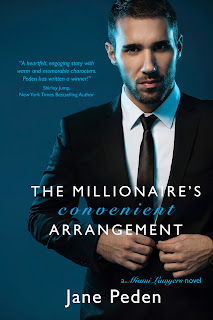 Thirty-three-year-old Ritchie Perez has made a name for himself as a legal eagle, both as a state prosecutor and as is one of three partners belonging to Flanagan, Berrington, and Perez. He gives back to the community, knowing firsthand what it was like to grow up having to make do with what his parents could afford for him and his five siblings and in a less than ideal neighborhood. He's been volunteering side-by-side with Maria Martinez, twenty-six, and her thirteen-year-old brother Joey. Maria tries to distance herself from Ritchie but when Joey is brought to juvenile court, she reaches out to Ritchie, who not only ends up representing Joey but offers himself up to be responsible to keep the troublesome teen in check for six months, which means Joey'll have to move in with Ritchie. The last thing Maria wants is to move in with the very same lawyer who ended up prosecuting her twin brother Tito, which resulted in a ten-year jail sentence, but she sees the positive influence he has on Joey. Could everything she's believed about Ritchie and the twin she has always proclaimed as innocent turn out to be wrong?

The Millionaire's Convenient Arrangement is the second book in the Miami Lawyers series from Jane Peden and it's one that I've been waiting to read ever since I finished the series starter, The Millionaire's Unexpected Proposal, where readers meet three best friends who are all partners in one law firm. To be fair, my expectations were high because I did enjoy book one and when it comes to a series, I don't think it's asking for too much that each of the stories resonate with the reader one way or another. Unfortunately, this follow-up just didn't click with me as much as its predecessor. I'm not saying that it was a terrible book. It wasn't. As a matter of fact, it was pretty good. My main issue was that I just didn't connect with either of the main characters and while their relationship was steamy and developing well enough, the fact that Ritchie did what he did in the second half of the last chapter with neither of them having exchanged three essential words just made it feel weird on my end. I'm giving 3.5 stars to The Millionaire's Convenient Arrangement, and I'm looking forward to reading The Millionaire's Intriguing Offer. ♥

Read my reviews for the Miami Lawyers series:

The Millionaire's Unexpected Proposal (book one) - 4.5 stars - My Review