Book Spotlight: The Queer and the Restless by Kris Ripper 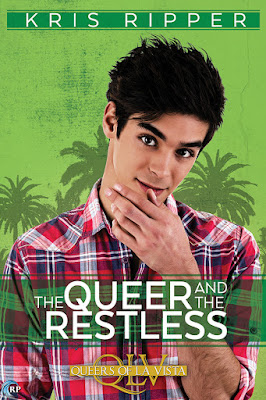 About The Queer and the Restless
Ed Masiello has been on testosterone for a year, is working his dream job as a reporter, and is finally passing as a man (so long as you don’t ask his abuela). But the investigation of a murder case is starting to take over his life. Afraid he’s becoming obsessed, he goes to the local club to relax, and meets the flighty, whimsical Alisha.

Alisha is a free spirit who’s tossed aside ambition for travel and adventure. Her approach to life is a far cry from Ed’s, and while Ed has always assumed that meeting his goals would make him happy, Alisha is much more content than him—despite all the plans she can’t yet fulfill.

As their relationship heats up, so does the murder case. Alisha thinks Ed needs a break, but someone’s got to find this killer, and he wants to be there when it all goes down. Besides, taking off into the great unknown with Alisha is crazy. But opting for what’s safe is just another way of living in fear, and Ed vowed to stop living like that a long time ago.

Add The Queer and the Restless on Goodreads.

A Guest Post from Kris Ripper
A Clash of Demands!

Sometimes I know exactly what a relationship’s going to look like before I dive into writing a romance novel. In The Queer and the Restless, though, I only knew the facts and figures about the developing murder mystery. I needed all of those things to line up perfectly with the books on either side, so it was especially fun to watch the romance develop.

Writers will often talk about plotting versus “pantsing”, or discovering the story as they go, and I always do a mixture of both. I knew both Ed and Alisha pretty well by the time I started writing them, but I had no idea how differently they’d view their relationship, and what  effects that would have on each of them.

Ed is super settled in what he sees as the life he’s supposed to be living. He’s transitioned, he passes most of the time (which is really important to him), and he’s got a career. Sure, he’d like to have a girlfriend. But he’s not looking for one.

Now Alisha, Alisha has no desire to be settled. She wants to go to work, come home, and plan trips to other places. She wants the freedom to travel, and she’d love to have someone with whom to do all that traveling.

The saying opposites attract makes sense to me—after all, what’s the point of being with someone just like you are?—and these two are definitely attracted. Alisha likes how grounded Ed is, and Ed surely loves Alisha’s fantasies of flying away for a bit.

The Queer and the Restless tells the story of a fundamental clash about what role a relationship serves in one’s life: is it an oasis from everything else? A place you can be safe, a place you can be yourself? Or is it integrated fully into even the mundane things in your life, is it a place for petty gripes as well as deep meaning?

The answer is “probably somewhere in between”. As I suspect you’ll discover when you read the book.

Giveaway
To celebrate the release of The Queer and the Restless, one lucky winner will receive an ebook from Kris’s backlist! Leave a comment with your contact info to enter the contest. Entries close at midnight, Eastern time, on November 5, 2016. Contest is NOT restricted to U.S. entries. Thanks for following the tour, and don’t forget to leave your contact info!