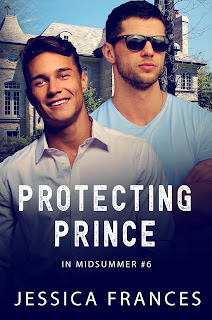 Note: An advanced reader copy (ARC) was provided by the author via Enticing Journey Book Promotions.
Five books later, the Greens--aka Rocky, Conner, River, and Ryder--are finally living their happily-ever-after, but Jessica Frances isn't quite done delivering HEAs in the quaint but quirky town of Midsummer. Book six in the In Midsummer series is the much awaited story of Henry Prince and Bryan Stokes. If you're a fan of the series, you already know who these two are and why I used the term "much awaited". For anyone out there who has yet to read the first five books (hop to it, people!), Henry is a world-famous actor who is openly bisexual, and Bryan is his straight close-in bodyguard and has been for years. A requirement of Bryan's job is focus, and he can't afford distractions. But after all the flirting, tension, and innuendo, fantasy becomes reality for both of them. However, an escaped stalker and rabid paparazzi could doom any hope for a potential happy ending.
After the fiasco that forever will be known as "Jen not realizing that the fifth In Midsummer book was already out until the day of release," I had to make damn sure I was signed up for the events for the next two books. (FYI: Thank goodness Safe was in Kindle Unlimited and that Enticing Journey Book Promotions had the sign-ups for Protecting Prince and Loving Love up on their website!) I've been curious as to how Henry and Bryan would finally act on their barely hidden feelings for each other, and Jessica Frances did not disappoint. I loved how all-in Bryan was! His devotion to Henry on a professional level was undeniable, but as his personal partner, it was so endearing. Admittedly, there was a point I wanted to smack Henry, but he redeemed himself so it was all good. The In Midsummer series has become one of my feel-good go-to reads, and any worry readers may have that Protecting Prince wasn't going to live up to the five Rocky-and-Conner books can set that aside because this stands tall on its own. Five stars.
--------------------------

Read my reviews for the In Midsummer series: