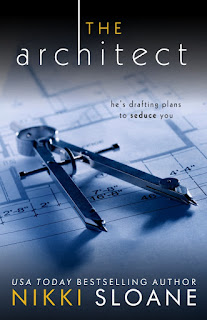 Note: An advanced reader copy (ARC) was provided by the author via Valentine PR.
It's a bountiful day in the neighborhood--the Nashville Neighborhood, that is, and by "bountiful", I mean copious amount of sex and romance. With this third book in the series, Nikki Sloane has given readers three times the usual, all thanks to her polyamorous story about one veterinary technician and the two very different men who can't get enough of her. Just a quick note: If you're new to the series, each book may be read as a standalone, although there are recurring characters and possible spoilers, so if you do intend to read the other books, may I just suggest that you read all three in order?
The Architect is headlined by Lilith, who first appeared in the Nashville Neighborhood series starter, The Doctor. When her very private neighbor bangs on her door asking for help with a stray cat inside his home, the twenty-six-year-old vet tech can't help but want to get to know every bit about Clay Crandall. It seems the thirty-five-year-old man isn't merely an architect but a furniture designer--the furniture being of the more kinky variety. He's eager to test Lilith's limits, but he makes it clear that he doesn't do feelings. When Clay is forced to be away for an extended period of time due to work, he brings in Dr. Travis Eckhart to stand in for him. Lilith's draw to Travis is as strong as the one she has to Clay, and when Clay returns, she may very well be forced to choose between them.
This book was hot and then some! I must confess that while I've read a lot of polymorous romances, it isn't necessarily a trope a gravitate to or actively search out. I'm often wary about the balance of emotions and feelings among all the participants in the relationship. However, Nikki Sloane did a stupendous job developing the relationship among the three as well as Lilith with Clay, Lilith with Travis, and Clay with Travis. Theirs was admittedly a mostly physical connection in the beginning, and I quite liked seeing them come together and further a stronger bond and create a more committed relationship. There was a whole lot of heat, but there was also more than a fair amount romance, and having all three cherish what they had at the end was so satisfying. Five stars go to The Architect.
--------------------------

Read my reviews for the Nashville Neighborhood series:

The Doctor (book one) - five stars - My Review