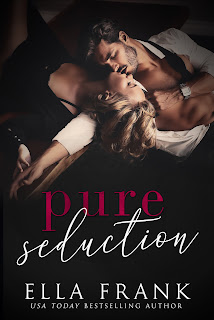 Note: An advanced reader copy (ARC) was provided by the author.
Bestselling author Ella Frank returns to the M/F romance sub-genre which first garnered her notice from readers with the first in a brand-new series, The Chamberlin Brothers. Set in the fictional town of Chamberlin, California, readers are introduced to a set of siblings, Noah, Ryan, Justin, and Brianna, bound together by their love for the mother and their hatred for their late father. Pure Seduction is the first book, and it's about Noah Chamberlin, the eldest among the siblings. He's the prodigal son who was sent away by his father to Italy right after his high school graduation, not only to learn more about the business of wine making but to keep him far from Laurel Anderson, the girl Noah loved. Instead Noah has stayed away for almost eighteen years to spite his father, only choosing to return when he learns of the man's demise. Some things in Chamberlin haven't changed since he left, but Noah is about to discover that his life is just about to change...
I've had the distinct pleasure of reading all of Ella Frank's books, so I know that over the past couple of years, she's focused more on her M/M and M/M/M romances--all of which I've loved. But I was also quite excited when I found out that she was kicking the new year off with a new series and that it would be M/F romance! Noah and Laurel's second-chance story was a good start, one with a whole lot of heat between, a secret or two, and some major family drama courtesy of Noah's deceased father whose controlling ways went beyond the grave. I liked that we get bits and pieces about Noah's three siblings, which has me looking forward to getting to know them better as the series progresses--although I'm not entirely sure if his sister is part of the series since this is called the Chamberlin Brothers series. I do have my theories about his younger brothers, Ryan and Justin, but we shall wait and see if I'm proven right when their own books are published.
The connection between Laurel and Noah was clearly still very much there, even after almost two decades of separation. I appreciated that Laurel didn't immediately leap into his arms upon his return, and that there was some hesitation thereafter. I do feel, though, that there were some issues that were glossed over, one that I won't mention in this review because I'm pretty sure doing so would qualify as being a spoiler. I wondered why Noah didn't make more of an effort to reach out to Laurel, especially considering she was supposed to be the girl that he never forget and thought of all the time over the years. Then there was one thing in Harry Chamberlin's will that gave me pause, and I suspect it'll play some sort of part in the series going forward. The last few chapters also felt a bit rushed. Still, I did enjoy this small-town romance set in wine country, and my curiosity is piqued as to what awaits the other Chamberlin siblings. Four stars go to Pure Seduction.
Release Date: 22 February 2021
Date Read: 21 February 2021
Learn more about Ella Frank.
Purchase Pure Seduction on Amazon.