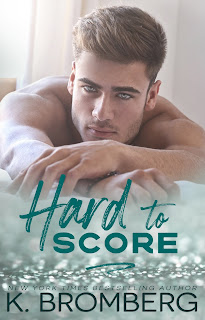 I fucking miss her. I miss everything about her. Her contagious laugh and her no-nonsense attitude. Her quiet advice and astute observations. Christ, I could name a million things about her but what it comes down to is that I just miss her. All of her. Completely. And it's time to fix that.

This series! Gah! Three books in, and every single time I'm done reading the newest addition, I think to myself that there's no way K. Bromberg could possibly keep it up, but then she does exactly that! Hard to Score is the third novel in the Play Hard series, and we've got the third Kincade sister's journey to her happily-ever-after. Just a quick note: Each book in the series can pretty much be read as a standalone since there aren't really any ties connecting the books other than the fact that all four sisters--Dekker, Brexton, Lennox, and Chase--are sports agents for Kincade Sports Management, a successful agency with their father, Kenyon Kincade, at the helm. Hard to Handle (book one) was about Dekker, the eldest sister, and Hard to Hold (book two) was about the second to the youngest sister, Lennox. This third Play Hard novel is about Brexton, the second oldest.
Growing up with their parents as best friends, she was Bratty Brexton and he was Dreadful Drew. Then one day, their families had a falling out, with Drew's father laying blame solely at the feet of Brexton's father. The last time they saw each other was nearly a decade ago, when they were teenagers. Now, he's in his seventh year of playing in the NFL, and she's a sports agent working with her father and sisters. He was her first love and first heartbreak, but he had no clue about her feelings for him back then. They're older now, and there's no denying the attraction. Falling for Brexton would mean falling for the daughter of the man that Drew has blamed for the abrupt end to his father's football career and this misery of his family. But could he have been wrong all this time?
The angst is strong with this one, and I was all for every single bit of it! Drew and Brexton didn't have some epic teen romance. If anything, they were just beginning to take notice of each other before their families had their falling out, though that was more one-sided than anything. I enjoyed seeing these main characters get to know each other as adults while we get bits and pieces of their dynamic as teens, as well as certain things that transpired in the past via flashbacks. I also liked how Drew finally came into his own as a football player, wanting to get out of the shadow of his father's disgraced career. Hard to Score serves as a poignant reminder that love and the truth set you free. Five-plus stars.
-------------------------
Read my reviews for the Play Hard series: