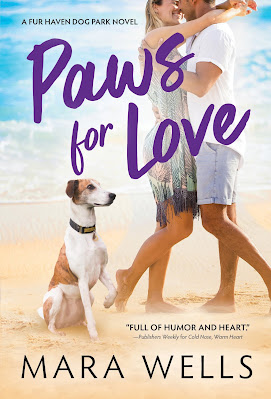 Paws for Love
(Fur Haven Dog Park #3)
by Mara Wells
Date Released: February 23, 2021
Sourcebooks Casablanca
About Paws for Love
Broken hearts—man, woman, and dog—have a second chance for love, healing, and happiness under the warm Miami Beach sun in this endearing contemporary romance…
Danielle Morrow works tirelessly for a greyhound rescue helping retired racing dogs find their forever homes. She guards her heart as vigilantly as her two adopted greyhounds guard her. One heartbreak per lifetime is enough for any woman, and no one she’s met since her high school boyfriend dumped her to join the military has ever tempted her enough to risk love again.
Knox Donovan expected to be career military, but an injury and an honorable discharge leave him uncertain of his future. When his brothers ask him to come back to Miami Beach to help with their new condo conversion, he has no intention of staying on in the city that has so many bad memories for him.
Knox is reminded that not all his memories are bad when he sees Danielle again at the grand opening of the new Fur Haven Dog Park. Fifteen years haven’t softened the pain of their breakup. But Knox is different now, more hard-edged and suspicious, and when he bonds with the retired racing greyhound, Sarge, Danielle’s cool reserve begins to melt. Sarge needs special care after the injuries that ended his racing career, and it’s not long before Danielle realizes that Knox does too. Can Danielle trust her heart to the only man who’s ever broken it?

Add Paws for  Love on Goodreads.

About Mara Wells
Mara Wells loves stories, but especially stories with kissing. She works in academe and lives with her family and two rescue dogs—a poodle-mix named Houdini Beauregarde and Sheba Reba Rita Peanut, a chihuahua-mix in Hollywood, Florida.