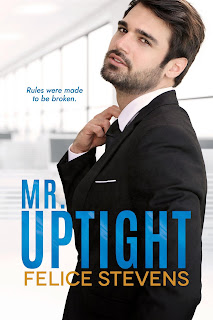 Note: An advanced reader copy (ARC) was provided by the author via Enticing Journey Book Promotions.
When I first saw the title of this book, I honestly thought it was going to have more of a romantic comedy feel to it. Well, it's safe to say that Mr. Uptight is NOT a rom-com, which in hindsight, I would have figured out since everything I've read from Felice Stevens leans towards satisfying my angst addiction. That doesn't mean, however, that I'm complaining about the lack of rom-com feels. Remember I mentioned the whole me being an angst addict, and Stevens just happens to be one of my go-to authors for that need of mine. This newest standalone of hers is also now one of my favorite reads from Stevens.
Mr. Uptight introduces readers to Jude Staubman and Mason Reiner. The former is thirty-four and the co-owner of The Company, a marketing firm, whose top priority has always been his younger sister, Ilana; the latter is thirty and the younger brother of Doug, The Company's other owner who also happens to be Jude's best friend and brother-in-law. For years, Jude has only seen as Mason as foolhardy and lacking ambition, but after having spent a decade away, the younger man is back and not just in time for Doug and Ilana's wedding. When they end up sleeping together after the wedding, Jude immediately labels it as a mistake, one he has no plans of repeating. But when Mason volunteers to take over as Jude's personal assistant, Jude isn't sure if he's worried that Mason hasn't changed one little bit or if he's truly matured and tempts Jude into wanting more personal from him.
There's a wee bit of angst in the story, but for a Felice Stevens read, I consider this one quite light compared to a lot of my previous reads from her. I really enjoyed reading Jude and Mason's story, and while it took quite a while for me to warm up to Jude, I did realize that there was so much more to him than his rather rigid and seemingly unforgiving stance on things. It was a combination of Ilana and Doug finally tying the knot and Mason being a constant presence in his life that appeared to soften him and help him realize that there was so much more to life and that he could, in fact, enjoy himself. I loved seeing them develop as characters and making their way to their well-earned happily-ever-after. The very satisfied smile on my face by the end said it all. I'm giving Mr. Uptight five stars.
Release Date: 18 February 2021
Date Read: 17 February 2021
Learn more about Felice Stevens.
Purchase Mr. Uptight on Amazon.