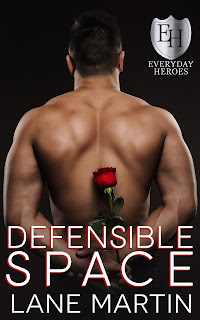 Note: An advanced reader copy (ARC) was provided by the author via Grey's Promotions.
Defensible Space is part of the latest batch of new release from bestselling author K. Bromberg's Everyday Heroes World. Penned by new-to-me author Lane Martin, this was the story of two people searching for something different in their lives. After a devastating fire destroyed so much of his community as well as his own home and that of his childhood and his years-long relationship with the woman he thought he would marry ended soon after, firefighter Carson St. James takes his beloved dog, Rascal, and heads to Sunnyville, California to work with a crew there temporarily. When Rascal's streak of mischief has him literally tied up with Penelope Anderson, a world-famous violinist desperately needing a break from her life as she's known it. Both Carson and Penny are running from everything they knew and found refuge in Sunnyville. Could they also find refuge--and perhaps, true love and a new sense of home--with each other?
This was a pretty entertaining introduction to Lane Martin's writing. Carson and Penny were such opposites, having very different backgrounds and personalities. They were also quite brave to have made the conscious choice to take a breather of sorts in a new place, and they really did immerse themselves in everything Sunnyville. Carson was an easily likable main character, although his penchant for staring at Penny's chest became rather repetitive after awhile. Penny, on the other hand, was someone I could relate with to a certain degree in terms of personality. The story itself was interesting, although I couldn't help but feel as if a lot of it was rushed, with certain moments skimmed over rather than delved into further. The absolute winner, however, was Rascal. This four-legged furry scene-stealer stole my heart and was my favorite thing about the book. Overall, Defensible Space was a quick read and a 3.5-starred addition to this book world.
Release Date: 11 February 2021
Date Read: 08 February 2021
Learn more about Lane Martin.
Purchase Defensible Space on Amazon.