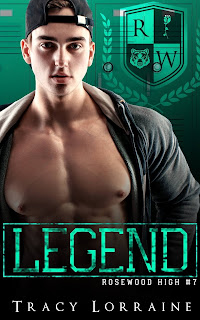 Note: An advanced reader copy (ARC) was provided by the author via Give Me Books Promotions.
Six full-length novels and two novellas later, and here we are: at the seventh and final (gasp!) novel in Tracy Lorraine's Rosewood High series. It's been one heck of a roller coaster ride with this cast of unforgettable characters, and Lorraine is ending things on a high with Legend. This is the story of Kyle Legend and Harley Hunter, with the former blaming the latter for the unfortunate turn his life has taken. Kyle has been carefully plotting the best and most satisfying for him to serve Harley her comeuppance, and then the opportunity unexpectedly presents itself. She may have been the girl he wanted for so long, but after what she did to him, she'll become the girl he needs to suffer for her sins.
I can't believe we're actually at the end of this series! I'm never prepared to say goodbye to a series that I've grown attached to, and that's exactly the case with the Rosewood High books and characters. That being said, I don't think Tracy Lorraine could have done a better job closing out what's become a popular and beloved series for so many. Kyle and Harley's story had some heartrending moments, but as clear as it was that there was a lot of resentment on Kyle's end, there was no denying that the hurt and sense of betrayal he felt was because he cared as much as he did about Harley. Suffice it to say that these two had a lot of growing up to do, and they certainly had growing pains, but it made that happily-ever-after of theirs even more satisfying. I'm seriously going to miss the whole Rosewood High crew, but I'm excited for the spin-off coming soon! Five stars for Legend.
-------------------------