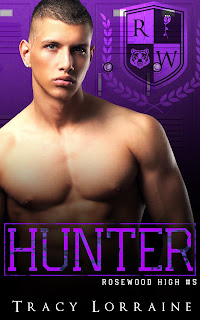 Note: An advanced reader copy (ARC) was provided by the author via Give Me Books Promotions.
I love me an addictive series, and one of the most addictive this year has to be Tracy Lorraine's Rosewood High. Five full-length novels and two novellas in, and it continues to be that great combination of entertaining and worthy of the emotional investment you put into it. Hunter is the newest book, and it features eighteen-year-old Zayn Hunter and seventeen-year-old Poppy Poore. The latter is the cousin of Jake Thorn (Thorn, book one of Rosewood High) and best friends with Harley Hunter, younger sister of the former. Poppy has had a crush on Zayn for years, but he's made it abundantly clear that she would never be someone he could be interested in. She's a shadow walking the halls of Rosewood, keeping her head down, preferring to go unnoticed. Zayn has always taken notice, but he isn't the only one. There's a predator in their midst, and Poppy is his prey.
Poppy and Zayn's story was such a fantastic addition to the Rosewood High series. The fact that the series as a whole has the sort of cast of characters that makes you want to get to know every single one of them is part of why it's such fertile ground for this continuing collection of books. Poppy and Zayn had the whole falling-for-your-best-friend's-sibling thing going on as well as a nice amount of tension courtesy of the enemies-to-lovers angle. It was great to see Poppy evolve over time, gaining confidence and having the courage to be a bit more outspoken and asking for help. Then there was Zayn who finally stopped acting like a jerk and owned up to his feelings for the girl whose buttons he enjoyed pushing. There's a new character that's piqued my curiosity, but the ending (and prequel!) has me looking forward to January for novel number six! 4.5 stars for Hunter.
-------------------------