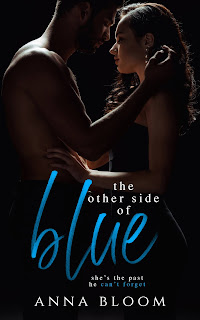 Note: An advanced reader copy (ARC) was provided by the author via Give Me Books Promotions.
The Other Side of Blue is the first book in Anna Bloom's The Other Side of Us series, and it's the story of Blue and Lyra, two seemingly star-crossed lovers who defy everything--even themselves--to be together. Lyra Lennox's heart has always belonged to one person and one person only: Blue. He was her brother, Luca's best friend and the boy who lived next door. She knew nothing of the life he lived until he climbed through her bedroom window and she saw just dire his circumstances were. And then things change, and it isn't until four years later, while Lyra attends college that she finds herself breathing the same air once again with Blue. Only now, he's Jack Cross, and he knows all too well what getting too close to the girl who became his light in the darkness could lead to. But like a moth to the flame, Jack can't resist the lure of Lyra...even if it could mean they get burnt.
This book had several popular tropes all meshed together into a beautifully written story. There was the best friend's brother angle four years prior, and then the whole forbidden element courtesy of her being an eighteen-year-old freshman studying music on a scholarship at Berklee and he being her pastoral aide, aka teaching aide, at twenty-four. There was so much about the book that I loved--from the enticing story of two people who shouldn't be together but want nothing else but to be the other's person--and there was no putting my tablet down from the moment readers are introduced to twelve-year-old Lyra and eighteen-year-old Jack, aka Blue. Where I hesitate to give it a five-star rating, though, is the story being set in the US but with the author slipping at times and using British English terms rather than the American English alternative. So, all things considered, I'm giving The Other Side of Blue 4.5 stars, and desperately need to get my hands on The Other Side of Green as soon as possible because that cliffhanger was...GAH!
Release Date: 12 November 2020
Date Read: 12 November 2020
Learn more about Anna Bloom.
Purchase The Other Side of Blue on Amazon.