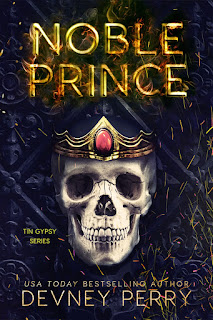 "Scarlett, tell me to stop."

"I'm doing my best to stay in control here." I jerked my hand to the side, closed my eyes and gritted my teeth. "Scarlett--"

She leaned in close. The whisper of her breath skated across my chest. "Lose control, Luke."

Dare I say that the Tin Gypsy series could very well overtake the Maysen Jar duet as my favorite Devney Perry series? Of course, they could simply share that top spot, what with two different feels but still equally as good. Four books in and Tin Gypsy continues to have that fantastic mix of romance and suspense and told in Perry's masterful way that I look forward to drowning myself in. Each book tells the story of a different couple, and yes, they can be read independently of one another. That being said, the core cast of characters recur throughout the series, and there are certain story lines that do play out over more than one book. So, if you're planning to read the series, my suggestion is to read the four books currently available (there are two more to be published next year) in order--Gypsy King, Riven Knight, Stone Princess, and Noble Prince--for the best experience.
Noble Prince is the story of Scarlett Marks, twin sister of Presley Valance (Stone Princess, book four in the Tin Gypsy series), and Luke Rosen, chief of police in the small town of Clifton Forge, Montana. (Fair warning: I may mention certain things from this point onward that could prove to be spoiler-like, so proceed at your own risk!) After the events that played out in the previous novel, readers find twenty-eight-year-old Scarlett in protective custody, but after one escape attempt, Luke decides that the safest place for her to be is in his home. After all, no one would ever think he'd be crazy enough to have a potential witness under his own roof. The more time the two of them spend together, the more he sees the unadulterated version of Scarlett, and the more she begins to trust Luke. In order to protect her, however, will Luke end up breaking the rules he swore to live by?
Okay, I admit it: I'm kinda-sorta-maybe-absolutely obsessed with all things Tin Gypsy. Devney Perry has created this series that merges several romance tropes that are considered favorites by many of my fellow readers and myself. With each new release, Perry is showing fans and readers that she's more than capable of giving us different stories while still keeping the threads that bind them together intact. I loved getting to know both Scarlett and Luke--two people who came from very different backgrounds and had such distinct home lives. My heart appreciated seeing Scarlett being welcomed into the family that her sister, Presley, had created for herself in Clifton Forge, as well as just how far Luke was willing to go to protect her. Both the character and story development were fantastic, and Perry's writing leaves me amazed. Five-plus stars go to Noble Prince.
-------------------------