Review: Date Me Like You Mean It by R.S. Grey 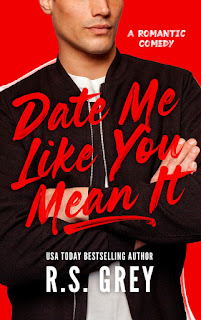 Note: An advanced reader copy (ARC) was provided by the author.
Date Me Like You Mean It is the newest standalone romantic comedy from R.S. Grey, and it's got a real friends-to-fake lovers-to-estranged acquaintances-to-figuring out what the heck it is they truly want to be together. Madison Lane and Aiden Smith met when her sister and his brother got married. Maddie and Aiden would go on to become roommates and best friends when she moves to Austin. The two share an easygoing friendship and one would do anything for the other and vice-versa, so when Maddie requires a fake boyfriend, Aiden steps in and does so for an extended period of time. Fake starts to feel very real, and maybe it doesn't help that Maddie's been nursing the-crush-that-will-be-denied. When Aiden abruptly heads for New York for his dream job, it leaves Maddie reeling and their friendship...gone. Months later, he's back for the holidays, and he's hoping to repair what they lost, but Maddie isn't interested. And worse? She's moved on.
Ooh, I do love a female main character who's feisty and a male main character who knows how to pull off one heck of a grand gesture. Told in two parts--the first solely from Maddie's point-of-view and the second from hers and Aiden's--I loved seeing how Maddie and Aiden's relationship went from one that was platonic, albeit with very secret feelings of more that neither one admitted to, and how the whole shift from fake lovers to real ones happens. Yes, Maddie's whole handling of anything to do with her feelings for Aiden may be a wee bit juvenile, but I understood that it was a matter of self-preservation for her. As for Aiden, it really was about a lack of communication, plus it was not as if he had actually made a choice. In short, these two should have opened up to one another early on and been honest about their feelings, but then we wouldn't have a rom-com to read if that had happened, right? And Date Me Like You Mean It was a fun, four-starred rom-com.
Release Date: 05 November 2020
Date Read: 05 November 2020
Learn more about R.S. Grey.
Purchase Date Me Like You Mean It on Amazon.