Review: Starting from Somewhere by Lane Hayes (Starting From #3.5) 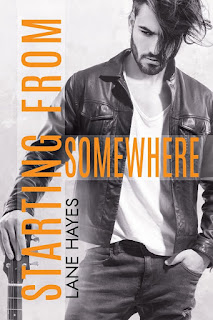 Note: An advanced reader copy (ARC) was provided by the author via IndiGo Marketing & Design.
Starting from Somewhere is a new novella in Lane Hayes's Somewhere From series, and it tells the story of a rock star and a geek. Robert James Prescott, better known as Bobby J to his friends and fans, isn't the type to be hampered down by plans. He's changed course more than once, following his heart and where his passion takes him. Being a guitarist for band on the rise Jealousy gives him purpose and a new dream. Then he meets twenty-four-year-old Cody Fletcher, a recently graduated student from grad school with a job in NASA waiting for him. Oh, and he also happens to be the new intern at Scratch Records. Cody tells Bobby J that he's researching all the stuff he wants to do before he starts work, and the older musician is more than happy to help him check things of his list. Falling in love with someone whose world is so foreign to his own was never on Cody's list though.
Low on angst and high on charm and romance, this newest addition to the Somewhere From series was one that I enjoyed a great deal, serving as a great way to end my reading weekend. Both Bobby J and Cody were easily likable, and I loved that they weren't total opposites, having more in common than you would think. I liked getting to know Bobby J even more here, what with him being a supporting character in the previous book and all. Cody was interesting as well, and I liked them coming together and seeing that they both had insecurities that they were dealing with. As always, catching up with the other couples made me a happy camper, and I definitely have high hopes that we'll be seeing more of Johnny, Bobby J's band mate and friend, as well as Topher, Cody's best friend and roommate with their own stories in the future. Starting from Somewhere snags five stars.
-------------------------