Review: Starting from Here by Lane Hayes (Starting From #3) 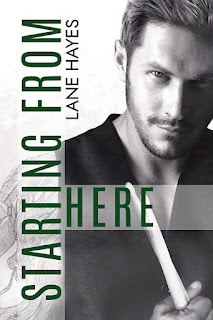 "Don't say anything. I'm probably complicating things for you. I want to apologize for that, but I can't. After all this time, you should know how I feel. You are my heart, T. That might sound cheesy as hell, but it's true. Wherever you are is where I'm supposed to be. I can't make you want me, but I'll always love you."

Tegan Monroe and Declan McNamara were once really good friends, the kind that shared secrets, knew each other's families, and visited each other's homes. They even became part of the same band, Gypsy Coma, and dreams of having the world listening to and loving their songs brought them even closer. That is, until one perceived act of betrayal cut every single tie between them. Now, Tegan is the drummer for Zero, a band that hit it big with their first album, but are now struggling a bit to get the same attention and recognition for their second one. On the other hand, Declan is the lead singer and songwriter for Jealousy, an up and coming band and his last shot at making it in the music industry. Both bands may belong to the same record company and have one manager, but that doesn't mean Zero wants anything to do with Jealousy. However, when Jealousy temporarily loses its drummer to an accident, the only one who can step in right away is Tegan. What'll it take for both to agree, and could this be the re-start they need?
This book is the one that I've most been looking forward to in the Starting From series. From the moment Declan first made his presence known in the series starter, I knew I wanted to know more, not only about what really happened with regards to the implosion of Gypsy Coma, but who the real Dec was. There were some glimpses to a less cocky Dec in the second book, and now, we get HIS story, one that he shares with Tegan. This book had a lot of tension, and not all of it was reserved between Declan and Tegan, but theirs was the sort that had me eagerly wanting to see how everything would be resolved. There was also a fair amount of angst in this one, which, of course, made me a very happy angst addict, but it was tempered by the banter between the main characters and the numerous lighthearted moments. Starting from Here easily snags five-plus stars.
-------------------------