Review: Happily Ever After in Bliss by Lexi Blake writing as Sophie Oak (Nights in Bliss #11) 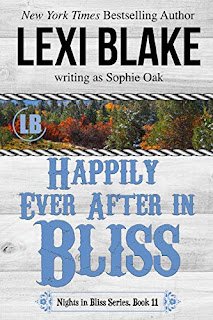 If you're a fan of the Nights in Bliss series, then you know all about Henry and Nell Flanders. They are, without a doubt, one of the most memorable couples in the entire series, and for good reason. Lexi Blake, writing as Sophie Oak, told their story in Once Upon a Time in Bliss, which is the eighth book in the series, but if you thought that was where it all ended, think again. Blake's eleventh installment refocuses the spotlight on this quirky couple, which shouldn't really come as a surprise considering that there were still certain things in play as far as Henry's past life as CIA operative John Bishop was concerned. Fair warning: I honestly believe this series is best enjoyed when read in order because of all the recurring characters and potential spoilers. Yes, there are eleven books, and you could try reading Once Upon a Time in Bliss before jumping into Happily Ever After in Bliss, but if you enjoy unconventional small-town romances, read the Bliss books.

I don't want to give any possible hints or probable spoilers away, so I'm not going to do my usual quick recap of the blurb in my own words. I was eager to read this book because I wanted to see how Henry and Nell were going to deal with everything that was being thrown their way. After all, it's seriously complicated when your spouse is missing certain important details about your past and said past comes a-calling. Their life was already in the process of change because they were awaiting the arrival of their baby, but then everything in Bliss reminds you to expect the unexpected. What can I say? Life in Bliss, Colorado is far from boring, and I've loved every bit of it. As always, seeing how this close-knit community comes together is one of the highlights alongside the never-ending love and romance between Henry and Nell, so Happily Ever After in Bliss snags five stars.
-------------------------

Purchase Happily Ever After in Bliss on Amazon | Apple Books | B&N | Kobo.