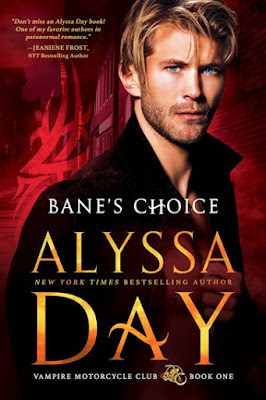 Bane's Choice
(Vampire Motorcycle Club #1)
by Alyssa Day
Release Date: October 27, 2020
Entangled Publishing
About Bane's Choice
Sons of Anarchy meets True Blood in this sexy new series from New York Times bestselling author Alyssa Day.
Bane lost his humanity ages ago. Nothing is more important than protecting his Vampire Motorcycle Club from the death magic invading his territory. The most ancient of vampires, he seeks cold, unfeeling, bloody vengeance...until a frustratingly sexy human doctor is thrust into his path. She tempts Bane to distraction. And distraction is deadly in his world.
Buttoned-up and meticulous Dr. Ryan St. Cloud never thought she’d find herself in the mix of a motorcycle club, let alone one full of terrifyingly badass vampires. Or how intrigued she is by their dark and enigmatic leader, who seems balanced on the knife’s edge of killing her...or claiming her.
But Bane’s choice is harder than it seems, because when that danger hits too close to home, he’s forced to choose between her life and everyone else’s… 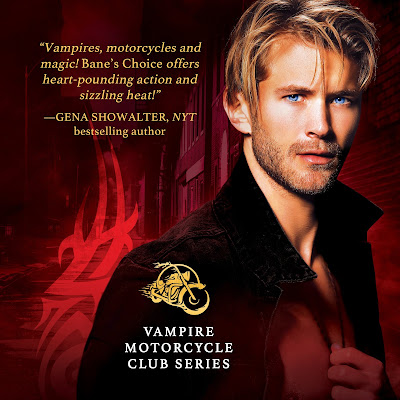 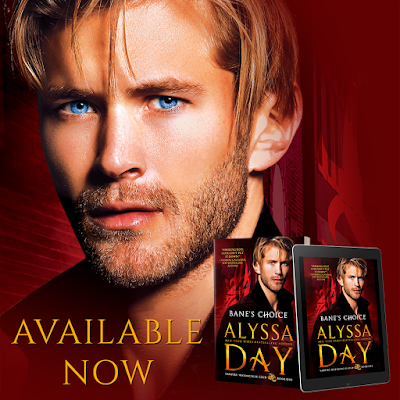 About Alyssa Day
Alyssa Day is the pen name (and dark and tortured alter ego) of author Alesia Holliday. As Alyssa, she is a New York Times and USA Today bestselling author with more than a million books sold, and she writes the Warriors of Poseidon and Cardinal Witches paranormal romance series and the Tiger’s Eye Mysteries, a paranormal mystery series. As Alesia, she writes comedies that make readers snort things out of their noses, and is the author of the award-winning memoir about military families during war-time deployments: Email to the Front. She has won many awards for her writing, including Romance Writers of America’s prestigious RITA award for outstanding romance fiction and the RT Book Reviews Reviewer’s Choice Award for Best Paranormal Romance novel of 2012.
Alyssa is a die-hard Buckeye who graduated summa cum laude from Capital University Law School and practiced as a trial lawyer in multi-million-dollar litigation for several years before coming to her senses and letting the voices in her head loose on paper. She has lived all over the country, including Florida, Mississippi, Washington state, Ohio, Wisconsin, Oklahoma, Colorado, Illinois, Texas, Alaska, Michigan, Virginia—and she has lived all over the world: the Philippines, Turkey, and Japan. She loves to travel, and just got back from trips to St. Pete Beach, Florida, New York City, Atlanta, and Savannah, and is heading to Houston soon. She currently lives in Florida with her Navy Guy husband, two kids, and any number of rescue dogs.
Connect with Alyssa
Website | Facebook | Facebook Group | Twitter | Instagram | Goodreads | BookBub | Amazon | Newsletter