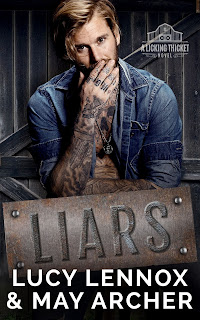 Note: An advanced reader copy (ARC) was provided by the authors.
You know how an author or a pair of authors write one book and then you think to yourself, "Wouldn't it be awesome if this character or that character got their own book?" Welp, that's precisely what happened while and after reading Fixers, the romantic comedy M/M authors Lucy Lennox and May Archer penned a few months back. So when this twosome announced that they had ANOTHER book in the works and that it was the second one set in the winsome town of Licking Thicket (which this awesome--yes, I'm going for all "-some" words in one sentence--series is aptly titled), I was thrilled! It was like a wish had been granted by two fairy godmothers, and I'm sure I wasn't the only one who felt that way. All that being said, if you've yet to read Fixers, worry not because you can still go ahead and read Liars on its own--but make sure to check out Fixers right after!
When twentysomething Parrish Partridge offers a helping hand and some unsolicited bit of advice to the beautiful, tatted man with a weepy infant in his arms, he never expected to see him again--no matter how much he wishes he could. So imagine when they literally bump into each other and Parrish heads over with an apology casserole, only to have thirty-year-old Edwin "Diesel" Church call him his fiance in front of a lawyer handling Diesel's custody battle for his niece, Marigold. Being in a stable, committed relationship should work in Diesel's favor, but can he convince Parrish to become his fake husband-to-be, and will doing that be easier than convincing himself they could have the real thing?
Joyous Pickin' Tidings, fellow M/M romance readers! There may not have been an lickin' or kissin' on my end, but there certainly was a whole lot of grinning and giggling while reading this rom-com. Diesel and Parrish had the sort of awkwardness that I find adorably appealing. The supporting cast of characters provided varying amounts of sense and sensibility as well as being a source of wit and humor. This book was that spark of joy that I desperately needed on a day when I was experiencing the doldrums. Unlike Diesel, I'm not going to suggest you just consider reading this book. Nope, I'm going to have to insist that you go and get a copy of Liars as soon as humanly possible. Five stars.
-------------------------
Read my reviews for the Licking Thicket series: