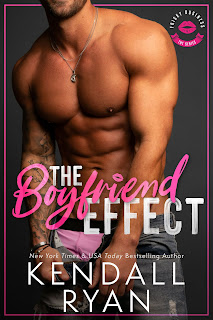 Note: An advanced reader copy (ARC) was provided by the author.
Kendall Ryan has an all-new series, and if the first book is setting the tone for the rest of the series, then we're in store for two more good reads! Frisky Business is a series about a group of five friends who start a business by the same name, and it's a business that deals with toys--sex toys. It kicks things off with The Boyfriend Effect, a falling-for-your-best-friend's-sibling (or conversely, falling-for-your-sibling's-best-friend) romance. Maren Cox has known Hayes Ellison for years and there are three undeniable things about him: he's hot, he's a workaholic, and he's a serial monogomist. Oh, and he also happens to be best friends with Maren's brother, Wolfie, and she's had a thing for him for years. After his latest breakup, Hayes decides he isn't boyfriend material and takes a break from dating. Then he begins to get closer to Maren--but that isn't dating. Just like whatever it is he's feeling does NOT have to do with him falling in love with his best friend's sister. Right?
This series was quintessential Kendall Ryan. The tone and feel of the story was light from start to finish, with very little angst and a whole lot of two people figuring out what it is they truly share together. Maren and Hayes were easily likable as main characters, and we've got them trying to get past their shared tie of Wolfie and that maybe Hayes isn't as terrible of a boyfriend as he believed himself to be. I loved that Maren had some confidence to her, that she knew that what was missing in Hayes's life was someone like her by his side. Or maybe not just any ol' someone who was similar to her, but HER her. There also wasn't a whole lot of unnecessary dragging out of the story and inasmuch as I love my angst, there wasn't drama for the sake of drama here. In the two hours it took me to read this book, I was happily entertained and quite satisfied with the romance, the story, and the cast of characters. Four stars for The Boyfriend Effect. I can't wait for more!
Release Date: 13 October 2020
Date Read: 12 October 2020
Learn more about Kendall Ryan.
Purchase The Boyfriend Effect on Amazon | Apple Books | B&N | Kobo.