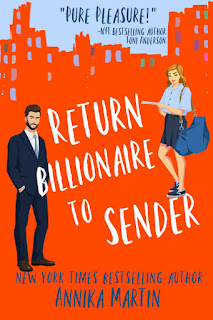 
There's just something about Annika Martin's Billionaires of Manhattan series that sates my need for smart and sassy romantic comedies. I've been hooked on this series from the beginning, and now, five books later, it's still as fantastic as that opening salvo three years ago. Book five is Return Billionaire to Sender, and we've got ourselves a big, bad grump of a billionaire in real estate acquisitions mogul Malcolm Blackberg and a totally idealistic and somewhat intrepid letter carrier who challenges him in Noelle...erm...yeah, she didn't have a last name, or if she did, I don't recall noticing it. If you did, leave me a comment!
He's ready and raring to bulldoze the apartment building she lives in, and she's ready and raring to make him see reason--maybe appeal to his heart, but Noelle quickly learns that Malcolm may not actually have one. So, what's a girl to do? Fate seems to drop the opportunity in her lap when she's mistaken as his court-appointed executive coach. He needs help upping his EQ (emotional quotient), but he doesn't see the need for it, not when it's his IQ (intelligence quotient) that's made him the British billlionaire that he is. He's introduced to "Stella", who prefers to be called "Elle", and her "coaching" is unorthodox, yet it's slowly but surely proving to be effective. Maybe he actually does have a heart, but when he discovers her deception, will Malcolm break Noelle's heart?
He's the big, bad wolf of real estate acquisitions and she's the not-so-little red(head) ready to go to war for her 'hood. Hey, I tried. But where I fail miserably in trying to be witty, Annika Martin has succeeded immensely. I loved how this opposites-attract romance never tried too hard to bring in the laughs. There weren't those too obvious setups; instead, Martin has penned a romance that easily flows from encounter to encounter between the main characters, and as the reader grows to love them (just as Malcolm and Noelle fall for each other), the laughs are elicited flawlessly in turn. The development of the characters and the story itself alongside wonderful writing has made Return Billionaire to Sender one of my favorite lighthearted reads this month and gets five stars.
-------------------------