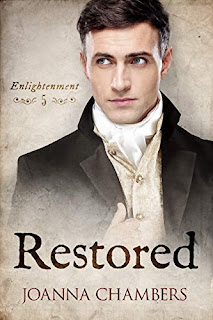 Kit had once despaired at how much he loved Henry--the young god who looked certain to crush his heart.

Who had indeed done so.

But this Henry was a man that Kit could trust with heart. This Henry was a man who had already set his own bruised heart on a sivler tray and handed it to Kit, without knowing what damage Kit might do it. Trusting that Kit would not hurt him, but willing to be hurt if it came to that.

Okay, confession time: When I found out that Joanna Chambers had a FIFTH book to add to one of my all-time favorite M/M romance series, I may have squealed loudly in delight and danced like a happy fool. I was alone, so no worries on embarrassing myself. The Enlightenment series' first four novels were not only fantastic reads, but the first through which are available on audio rank among some of my favorite listens. So yes, I was totally looking forward to reading whatever Chambers had in store for fans and readers, and goodness me, but Restored went above and beyond my already astronomic expectations!
It was in 1808 when twenty-nine-year-old Henry Asquith, Duke of Avesbury, made the difficult choice to leave his twenty-three-year-old lover, Christopher Redford, to put his duties and responsibilities as a husband and father first. He made sure, however, that his arrangement with Christopher was honored, so as to provide him with a comfortable future. Eighteen years later, Henry returns to London for a brief respite when he learns that his former lover never received what was promised him. Henry seeks out the man who was once his Christopher, but the man now called Kit is markedly different. Henry may have longed for redemption from Kit, but does he hope for their restoration as well?
I didn't do a re-read of the previous Enlightenment novels prior to reading this, but believe me, I'm itching to do so now. I adore Joanna Chambers's writing, and she's brought this heartrending historical romance about two men who had a love that came along at the wrong time, and not simply because men engaged in sexual relations together was considered criminal and punishable by death back then. I tried my best to not give too much away in this review, and I'm making an effort to keep it as short as I possibly can to prevent spoilers in case I over-gush. For anyone who has yet to read the series, you can freely go into this one and not feel lost. I also have high hopes to a couple of supporting characters will get their own books very soon! Five-plus stars for Restored.
Date Read: 28 October 2020
Learn more about Joanna Chambers.
Purchase Restored on Amazon | Apple Books | Kobo.