Review: When the Stars Fall by Emery Rose (Lost Stars #1) 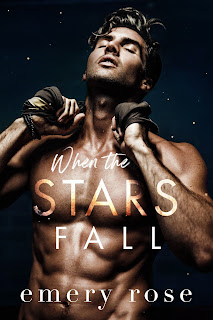 Was there a chance she could still love my broken, fucked-up self? The man who had lost part of his soul to war and his entire heart to a girl?

Emery Rose is one of those authors every angst-loving romance reader needs to read. Just when you think there isn't any piece of your heart left for her to take, she writes another heartrending story of love found and lost (and ultimately, found again) and snags what's left of that heart of yours. When the Stars Fall is her latest novel, and it's the first in a new series titled Lost Stars that I think--because I like thinking ahead like the weirdo that I am--is about the McCallister brothers (three actual brothers with the same parents and their cousin who has become more like their brother ever since their parents took him in as a child). This series starter is about the eldest among the original three brothers, Jude McCallister, and the girl he's protected and cared for ever since they met at ten years old.
She was always the girl that he had a protective streak over, but Lila Turner had her own streak--the independent kind--and she reminded Jude McCallister time and time again that she didn't need any boy's help or protection. They were frenemies who became best friends over the years, and it was a close friendship that they shared with Jude's cousin, Brody McCallister. All three were around the same age--each one just ten when they first met, Brody being the oldest by a few months, followed by Jude, with Lila trailing behind. They shared a bond that grew stronger as they grew older, not even affected when Jude and Lila fell in love. Then Jude went off to become a Marine like his father, and when he returned, he wasn't the same guy he was before he left. At his breaking point, he chose to leave everything and everyone behind. Six years later, he's back in Cypress Springs, Texas, and much has changed. Lila's heart used to be his; now, it belongs to someone else.
Told in three parts, this beautifully penned romance brought all the feels and then some. It would be so easy to lay blame at the feet of one character, what more two or three of them, but I'm not the sort of reader that expects fairy tale-like stories where the main characters are pining away for each other during their years apart nor am I the sort that demands that they get from point A to point B with nary a hurdle in their way. That isn't real life, and well, I like to have reality weaved into my romance, but that's just me. So yes, the main characters and a notable peripheral character were not perfect. They were flawed and made choices that may not be popular to some, but mistakes are made and at least these people learned from them and made the most from them, helping to move forward. Forgive me if I sound defensive, but yeah, it's about personal preference, I guess.
Emery Rose has created this story of love and family, of acceptance and forgiveness, and weaved all those themes together to come up with this novel that grabs hold of your attention while squeezing your heart. I love how we get to see these friendships form and this one romance flourish and then flounder until enough time passes for them to attempt to build upon firmer foundation. Jude and Lila were flawed main characters, but their love for each other overcame the challenges that came along. It wasn't easy and it took work on both parts, but love and family prevailed. I'm giving When the Stars Fall five-plus stars, and I can't wait to see what Rose has in store for the next Lost Stars book.
Release Date: 19 October 2020 18 October 2020 (early release)
Date Read: 19 October 2020
Learn more about Emery Rose.
Purchase When the Stars Fall on Amazon.