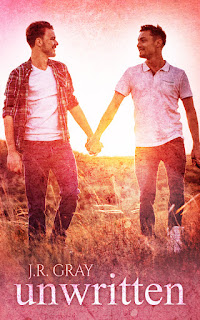 Note: An advanced reader copy (ARC) was provided by the author via Give Me Books Promotions.
J.R. Gray returns to his Unscripted series, but this third novel is about a new couple, so if you've yet to read the first two books--Unscripted and Rewritten--you could dive into this new book without needing to read anything that came before it and still enjoy it and understand what's going on. The main characters in Unwritten do appear in the earlier books, and the main characters from those first two books are supporting characters in this third one, but there's nothing too spoilery (well, other than Quellcrist King and Hale Evans end up happily together, but that's not a shocker since this is a romance after all).
Twentysomething Tobias West is one of Hollywood's most recognizable actors, and he has a successful career. He's about to start work on the second movie of a popular superhero film franchise, but when Tobi meets his new director, he may be the one in need of saving. Fortysomething Mel Finch is hot, and Tobi is drawn to him immediately. The attraction is mutual, but Mel knows becoming involved with one of his actors could mean trouble for both of them. After all, there's a reason why there are non-fraternization clauses in their contracts. Can they both keep things safely in the friend zone, or will their feelings--and a bossy matchmaking dog--push them out of it and into each other's arms?
Third time's the charm because this third Unscripted book is my favorite in the series! Mel and Tobi's story had a slow-burn feel to it, and it was done rather well, building that anticipation as the main characters try to figure out how to be friends even though they want to be more. There's also the element of the forbidden considering Mel is the director on the film Tobi is acting in, plus the May-December feels because of the twenty-year age difference. This wasn't as angsty as the first two books, but this angst addict is not complaining because I was quite happy and satisfied with what J.R. Gray gave readers. Can I also just say that Alfred and Finley, aka Tobi's dog and bodyguard, respectively, provided some great lighthearted moments? Too darn cute! Unwritten receives 4.5 stars.
-------------------------