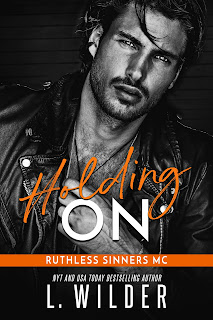 Note: An advanced reader copy (ARC) was provided by the author via Enticing Journey Book Promotions.
Holding On is the second book in L. Wilder's Ruthless Sinners MC series, and the club's enforcer gets his chance to find love once again. Shotgun is Ruthless Sinners' enforcer for a reason, and he's damn good at what he does. This is the kind of life he's chosen, with brothers he trusts and know that he isn't always the most forthcoming of people. He has his reasons for not wanting to be as emotionally involved and invested, especially when it comes to a woman. He knows all too well what loss feels like, and he has yet to let go of the guilt that he's placed solely on his shoulders even after all these years. And then he and his brothers find the bruised and beaten body of a woman in the dumpster behind one of their businesses. Remington Taylor becomes his game changer. She doesn't see him as just Shotgun--she sees him as Noah, too. What will it take for him to see that holding on to the past and the guilt isn't as important as holding on to a future with his Remington?
Two books in and the Ruthless Sinners MC series continues to entertain. The manner in which Shotgun and Remington meet was certainly extraordinary, but then not much surprises me anymore when it comes to MC romances because the lifestyle isn't exactly about hearts and flowers. Their story had a slow burn feel to it, and that mostly had to do with Shotgun being as hesitant and wary as he was of acting on his attraction and feelings towards Remington, as well as trying to figure out who assaulted her and why. Great romance, action, and a whole lot of tension made Holding On a four-starred read.
-------------------------
Read my reviews for the Ruthless Sinners MC series: