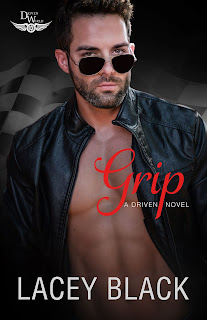 Note: An advanced reader copy (ARC) was provided by the author via Grey's Promotions.
Grip is my second read in the Driven World, which are books that take their inspiration from K. Bromberg's Driven series and is part of the KB Worlds book universe. Funnily enough, I've yet to read the original series, although I have read all of Bromberg's other books. Weird, I know, but yes, her Driven books are on my to-be-read list. Now, back to Grip, which is written by Lacey Black. This is a complete standalone, and even though the main characters in the original Driven trilogy make appearances here, readers who aren't familiar with them and their story--like me!--will still be able to fully enjoy this new book.
Grip is a second-chance romance set in the world of competitive open wheel racing. Mack Cruz was only sixteen when he was noticed by legendary open wheel crew chief Jim Stanley took notice of him at the dirt track he owned. Eight years later, Mack would receive a phone call that would change his life at twenty-four. Colton Donovan wanted him to drive for CD Enterprises, but it was an offer he would have refused if the love of his life, Jim's only daughter and talented photographer, Lena, had asked him to. She didn't want to travel from race track to race track in a motor home. Been there, done that, and at twenty-five, she simply wanted to be home at Brenton, Kansas. She wanted him to live his dream, and he wished for her to be happy, and so they ended things. Three years later, it's Lena who gets a call that'll change her life--Mack wants her to come to California to help him raise his infant son. Whose grip will keep them from going off-course first?
This was a really enjoyable read, one that earns bonus points because Mack's son shares the same name as my beloved furry baby boy--Oliver.  It was interesting to see how Lena ended things with him because she wanted to stay in Brenton and didn't want him to miss out on his dream, and then three years afterwards, she heads to California because he calls saying he needs her. Mack's internal back and forth made me think he was protecting himself from potential heartbreak, especially considering she was the one who ultimately made the decision they go their separate ways. I liked Mack's pit crew--who was essentially his chosen family--and Lena's dad was great. The inclusion of the nanny drama felt unnecessary, but Grip was still a four-starred read, and I hope Fish gets a book.
Release Date: 15 October 2020
Date Read: 15 October 2020
Learn more about Lacey Black.
Purchase Grip on Amazon.